The international community urged the leaders at the NCC meeting to set up an applicable and reliable timetable for the completion of the ongoing parliamentary election in the country. 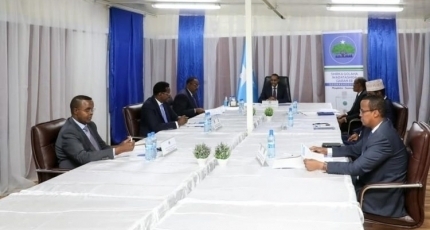 MOGADISHU, Somalia – The top Somali political leaders are gathering in the capital, Mogadishu for the third day in a row to find a solution to alleged irregularities in the election.

The meeting chaired by PM Roble saw the participation of the leaders of five Federal States, the Mogadishu mayor, the opposition, and the foreign diplomats in Somalia's capital.

The most heated debate is happening on Wednesday over the disputed election of some of the Lower House seats, including one grabbed by the acting Intelligence chief Yasin Farey.

The union of the opposition presidential candidates has on Tuesday issued a statement calling for a re-run election of all the disputed seats to return the process to the right path.

The international community urged the leaders at the NCC meeting to set up an applicable and reliable timetable for the completion of the ongoing parliamentary election in the country.

Farmajo whose chaotic four-year presidency expired in February 2021 and stayed in power for 1 more year illegally now plans for an indirect extension by interfering with the election.

The outgoing president made two attempts to stage a coup after refusing to hand over power smoothly to an elected successor. His stay in Villa Somalia fuelled the political tensions.

Somali people are eagerly keeping an eye on the ongoing talks in Mogadishu, which is the latest hope for ending the failures in the election and an end to the current political crisis.

Somali PM has failed to execute his mandate to finalize the electoral process in 2021 and this has put the country at risk of sliding back to the civil war in the war-torn nation.