Hamza Said Hamza has been accused of stealing $1.8 million that was donated to the Youth and Sports ministry by FIFA and UNFPA for the development of sports and war-torn football stadiums in Somalia. 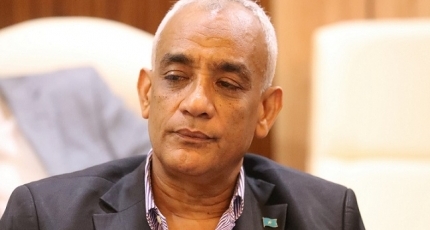 MOGADISHU, Somalia - The Minister of Youth and Sports is facing a corruption scandal following the recent defeat of the Somali national football team in a match against Oman at FIFA Arab Cup 2021 in Qatar last month.

Hamza Said Hamza has been accused of stealing $1.8 million that was donated to the Youth and Sports ministry by FIFA and UNFPA for the development of sports and war-torn football stadiums in Somalia.

The local soccer associations have written to the minister, asking him to resign from office over the embezzlement of the donor funds which ended up in his pocket instead of spending on the right projects.

Sources close to the ministry told Keydmedia Online that the Minister who has been a Member of the Somali Parliament plans to use the money for re-election after his term expired on December 27, 2020.

Somali Football Federation [SFF] President Abdiqani Said Arab is involved in the corruption allegations, according to the reports, and is said to be a close friend of the Minister of Sports and worked all times.

Last month, FIFA questioned the SFF boss and the minister over the missing funds, per the sources. Both senior Somali officials are in trouble after this accusation surfaced on media.

In 2019, the head of women’s football in Somalia has informed FIFA that money made available by the world governing body to support the women’s game in her country is not reaching its intended target.

Somalia ranks as the world's most corrupt country due to the lawlessness and lack of accountability in the Horn of Africa, which was beset by three decades of bloody conflict.