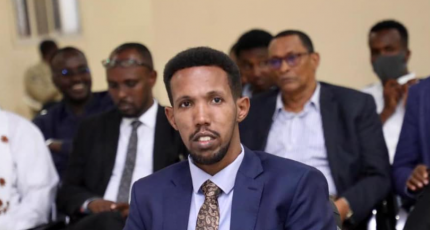 MOGADISHU, Somalia - Somalia's hope of getting back on its feet is fading after the much-awaited election is marred by corruption, voter fraud, and manipulation by top leaders in power.

On Thursday, the acting director of the notorious Intelligence Agency [NISA] Yasin Farey who was indicted for a high-profile case of murder has been elected MP in Galmudug state.

Farey, who is the right-hand man of Farmajo - the outgoing president Mohamed Abdullahi Farmajo won a seat in the 11th parliament after an easy win against his opponent Mohamed Ali.

His victory was not possible without help from his bosses in Villa Somalia - Farmajo and Fahad Yasin, the two most senior figures running the election behind bars, according to KON source.

The electoral officials who are hand-picked members in the poll teams could not stop the vote from being rigged in front of them in a broad daylight. This killed the credibility of the election.

Yasin Farey's seat was locked up for him alone to win, after the heavyweight candidates, including former NISA chief Gen Turyare, were blocked from joining the race by Galmudug SEIT.

He and other NISA officials spearheaded by Fahad Yasin face charges of the murder of Ikran Tahlil, a senior cybersecurity expert who worked for the spy agency for three years.

She went missing on June 26 of this year after returning from the UK. Her mother Qali Guhad said her daughter was kidnapped by her bosses and killed within NISA headquarters.