The Somaliland election was reportedly marred by vote-buying and irregularities as Somalia gears up to the much-awaited Lower House ballot. 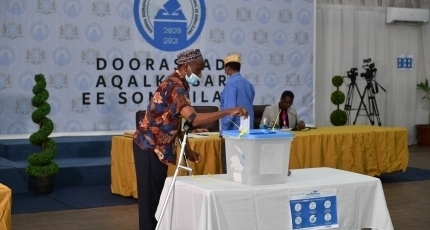 MOGADISHU, Somalia - Electoral Delegates from the northern regions have completed the election for the new 11 senators who will represent Somaliland in the upcoming Upper House.

The process of the election was marred by a long dispute between deputy PM Mahdi Guled and outgoing Senate speaker Abdi Hashi over the share of the seats that delayed the schedule.

The election held at Afisyoni tent around Mogadishu airport saw 46 delegates, some hid their faces elect their Senate seats. UN and AU envoys were present on the first day of the vote.

The outgoing Somali president Mohamed Abdullahi Farmajo tried to interfere in the election to produce senators who supported him but failed in the attempt, thanks to pressure from the international community and opposition candidates.

Farmajo whose four-year-term ended in February 2021 has previously lost elections in Jubaland, HirShabelle, and Galmudug, and is now defeated in the Somaliland vote in Mogadishu.

Election for the upper house has reached a final stage, and lower house elections are expected to begin soon which are feared to be delayed as there are many unresolved challenges.

The existing challenges include the Gedo issue, where Madobe and Farmajo are battling for control and security at the polling station as Al-Shabaab vowed to disrupt the voting exercise.

When the ongoing parliamentary election is complete, the joint two houses of the national assembly consisting of 329 members will elect a new president in an indirect ballot in Mogadsihu.