Somaliland goes to the polls to pick new parliament

Three main political parties are vying for the 82 seats of the region's parliament. 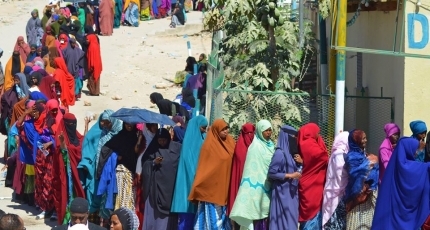 HARGEISA, Somalia - After 16 years of delay, Somalia's northern breakaway region of Somaliland went to the polling stations on Monday morning under tight security with troops deployed on key areas.

More than 1.3 million voters are eligible to pick their leaders in the civic and parliamentary elections in Somaliland in a tight race among three main political parties - the ruling Kulmiye, UCID, and Waddani.

The registered voters have lined up to cast their votes in 2,709 polling stations opened across Somaliland. They are choosing from among 522 candidates for 342 district council seats.

A team of observers organized by South Africa’s private Brenthurst Foundation and led by former Sierra Leone President Ernest Bai Koroma is in Somaliland to monitor the ongoing elections, a move the region wants to market its nascent democracy.

Somaliland in northern Somalia is still considered by the international community as part of the Horn of Africa country and it has celebrated this month 30 years of self-independence.

The civil society and community activists have expressed their disappointment in the parliament’s vote against the quota for women and minority groups in Somaliland, a region that has been ruled by one clan since 1991.

Journalists detained for covering a shootout at Somaliland prison

Tension has been running high in the Prison, with military vehicles in armored vehicles seen in and around the facility. There were no immediate reports of casualties as a result of the shooting.

Somaliland market fire losses estimated at up to $2 billion