The ruling Kulmiye led by Muse Bihi party lost to the opposition on May 31 parliamentary election in Somaliland first since 2005. 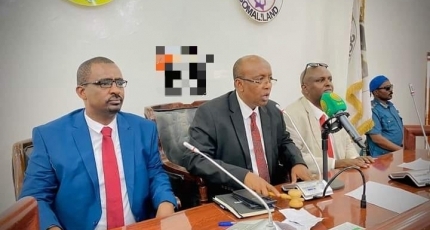 HARGEISA, Somalia - The lawmakers of the Somaliland parliament have elected Abdirizak Khalif from the opposition as the new speaker following an election held in Hargeisa today.

Khalif received 42 votes in the first round while his rival candidate from the ruling Kulmiye Yasin Faratoon garnered 39 votes during the election, which took place in a show of hands.

The Parliament commences today, Tuesday 3 August 2021, with the swearing-in of new Members. This is the 5th Parliament of Somaliland since the northern region claimed unilateral independence in May 1991.

Said Mire Farah has been elected as the first deputy speaker, while Ali Hamud becomes the second deputy. Both lawmakers are members of the opposition parties - UCID and Waddani who formed an alliance to beat Bihi's Kulmiye.

Said received 41 votes, while Ali Hamud received 43 votes. 81 out of the 82 seats in the House were present in the first session who elected the new speaker and his two deputies.

Somaliland's parliament has not held elections since 2005, and voting was postponed several times due to political differences and divisions over the region's electoral commission.