He added that six more people were wounded in the suicide bombing that was claimed by Al-Shabaab, Al-Qaeda’s East Africa branch which is trying to oust the weak UN-backed Somali government. 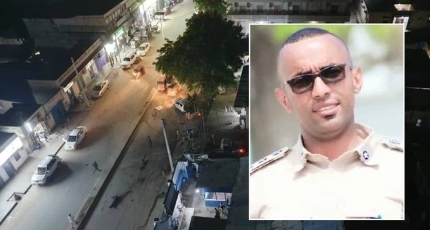 MOGADISHU, Somalia - A suicide bomber has blown himself up at the gate of a police station in the Somali capital Mogadishu on Sunday evening shortly after the people break their fast.

Speaking to the reporters at the scene, Somali police spokesman Sadik Aden Ali [Dodishe] said a walking man detonated an explosive belt strapped around his waist at the Waberi district police station gate.

Dodishe has confirmed the deaths of at least six people, among them Waberi police chief major Ahmed Bashane and major Abdibasid Mohamud Agey, the deputy Waliyow Adde Police and two other soldiers.

He added that six more people were wounded in the suicide bombing that was claimed by Al-Shabaab, Al-Qaeda’s East Africa branch which is trying to oust the weak UN-backed Somali government.

Ambulance sirens echoed across the area after the blast, with dozens of police cordoned off the scene and halted public transport momentarily as the wounded taken to hospitals.

Top government leaders such as the outgoing president Mohamed Abdullahi Farmajo and PM Mohamed Hussein Roble who is now in Saudi Arabia have strongly condemned the attack.

“I extend my condolences to the families, relatives, and the Somali people in general and to the Somali Police Force in particular for the loss of officers, deputies, soldiers, and other citizens in tonight's bombing in Mogadishu,” said Somali police chief Gen Abdi Hassan Hijar.

The police station which is located along the busy Makka Al-Mukarama streets has been frequently targeted in the past by Al-Shabaab, killing many police personnel.

Al-Shabaab often targets high-profile areas in Mogadishu as the group faces a new military push from Somali forces backed by African soldiers in the southern regions of the country.