At least 11 die in suicide bombing at Mogadishu tea shop

The blast is the second since last April in the same vicinity as Al-Shabaab intensifies attacks against Somali military bases. 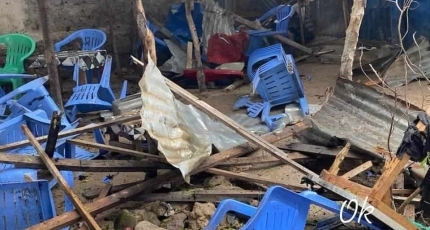 MOGADISHU, Somalia - A police officer says at least 11 people were killed and several wounded when a suicide blast at a tea shop in Mogadishu on Tuesday afternoon.

Capt. Dahir Farah, a Somali police officer confirmed to KON that the bomber walked into a crowd who were drinking tea in the area near a military base and detonated himself.

The huge explosion ripped through the cafe frequented by Somali government soldiers, said Farah, adding that the wounded have been rushed to a nearby hospital for medical treatment.

"I saw several dead bodies carried away in an ambulance following the suicide blast followed by a sustained gunfire by the security guards of Dhagabadan camp," said the police officer.

There was no immediate claim of responsibility for the bombing which becomes the second of its kind since last April in the same vicinity in Wadajir district, south of the Somali capital.

However, police pointed the finger of the blame at Al-Shabaab, which has been waging a long terror insurgency to unseat the internationally-backed Somali government in Mogadishu.

Somali Prime Minister Mohamed Hussein Roble has strongly condemned the attack in the capital, sent condolences to the families who lost their lost ones in the terrorist incident.