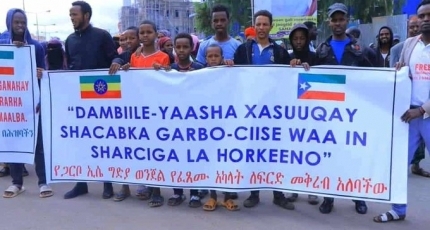 JIGJIGA, Ethiopia - Hundreds of soldiers from the Somali regional state in Ethiopia were sent to the flashpoint areas of the clashes between Somali pastoralists and armed militia from the neighboring Afar region.

The deployment of the troops fueled the tension in Gabraiisa town over a regional boundary dispute in northeast Ethiopia that led to recurrent conflict in which many people were forced to flee their houses, according to local officials.

On Tuesday, an attack by Afar militia left at least 40 people dead while dozens of others were wounded. The two sides are getting reinforcements amid fears of full-scale war that spills across the two regions near the Djibouti border.

Many people took to the streets in Gabraiisa city on Tuesday, calling for the cessation of the hostility and bring immediately those behind the execution of the innocent civilians to justice.

The rally came after Ali Bedel, spokesperson for the Somali region government, told Reuters Afar militia "massacred hundreds of civilians" on Saturday this week by the Afar fighters.

Ethiopia is sliding into a civil war as TPLF is vowing to attack the capital Addis Ababa and neighboring Amhara region after making significant gains in Tigray, seizing control of Mekelle from the Federal forces.