Somali soldiers continue to defect to opposition side

But the determination of opposing figures including troops won forcing the outgoing to bow down to their pressures alongside Int Community. 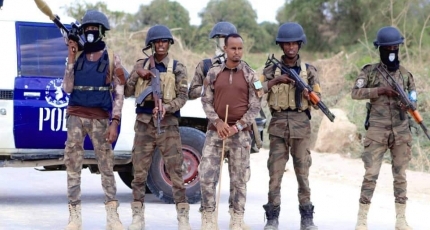 MOGADISHU, Somalia - Members of the Turkish-trained special police unit known as "Haram'ad" are reported to have defected to the opposition side, joining growing force against the outgoing president Mohamed Abdullahi Farmajo.

The defections have been continuing within the Somali armed forces after the soldiers said they were deprived of their salaries following the rejection of the extension term late on Sunday, 2nd May.

Captain Moumin who is the most outstanding officers among the brigade sided with the "Forces of National Salvation" and showed solidarity and a sense of reassurance in their battle of which they made the illegal extension term futile.

The outgoing President who still maintains to remain as the commander-in-chief of the Somali army was accused of taking revenge against the soldiers who staged the mutiny and fought along with the opposition by excluding them from the SNA list and the payroll.

The determination of opposition forced Farmajo to bow down to their pressures and disown the two-year term extension that was finally disbanded by the parliament's Lower House last Saturday and the MPs have reversed the Sep 17 indirect election deal.

With the continuation of troops defection from the government, Somalia is facing a growing challenge ahead despite the caretaker PM’s efforts to bring the mutineers to their respective bases after some of their demands were met.

It’s up to PM Rooble to keep persuasions rolling to lift the country from the uncertainty surrounding its future as he was handed over to security responsibility and the management of the election process.