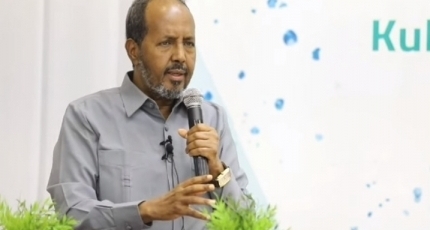 MOGADISHU, Somalia - The former president of Somalia Hassan Sheikh Mohamud has joined his voice in the growing pressure on the outgoing top government leaders to bring missing soldiers back home.

In his speech to youth gathering in Mogadishu, Mohamud has strongly condemned the continued silence of the incumbent on the matter as many Somali parents are in desperate need of answers.

“Somali youths just like you were sent to Eritrea, some were lured for job opportunities in Qatar due to the high unemployment rate in the country. They were seen taking part in the Tigray conflict,” he added.

As the youth’s whereabouts remain shadowy, the ex-president blamed Farmajo for exchanging the soldiers for money, adding that the sensitive issue can’t be hidden and the truth will one day be known.

The trainees have been recruited from most part of the south and central regions of Somalia by NISA chief Fahad Yasin and deployed to Eritrea by planes for secret training.

Another former president Sheikh Sharif who is currently leading an opposition alliance has called those behind this national crime to be held accountable and bring them to justice.

The news sent shock waves among the parents who have been searching for their sons and this has sparked street protests in the central regions and in the capital, Mogadishu to demand the return of the soldiers.

The situation escalated again after the United Nations issued a report this week, confirming that Somali soldiers have been spotted in Tigray while fighting along with Ethiopian and Eritrean troops against TPLF.