What we know about the Police chiefs killed in Mogadishu bombing?

He was appointed the PC of Waberi earlier this month of May where he took his final breath in an explosion carried out by the al-Qaida-linked militants of al-Shabab. 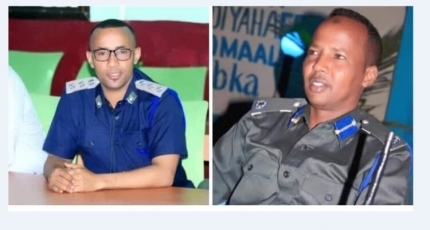 MOGADISHU, Somalia - The Police Commissioner of Waberi, Ahmed Abdullahi Bashane was among the people killed in the last night suicide bomb attack aimed at the district station in the capital Mogadishu.

The PC who was on duty during the blast conducted by the insurgents was plotted to kill him and others security officials as he was among those outstanding figures in the Somali Police becoming two times the deputy PC of Wardhigley and Waberi and served as the PC of Wadjir and Abdiaziz districts.

Bashane was new to the job. He transferred from another police station within Mogadishu less than a month ago, officials said.

Lieutenant Abdinasid Mohamud Agey who was the deputy chief of Waliyow Adde section also died of a wound he sustained during the attack in the hospital.

Al-Shabaab claimed the responsibility for this attack. The Somali government strongly condemned the attack extending condolences to the families of those who died.

The suicide explosion has taken a toll on civilians as well leaving a neighboring city in the vicinity of the station and 3 other soldiers dead, according to the Somali Police Commission.

Six other people were injured in the explosion, according to the police.