NAIROBI – Three years to the day since a famine that eventually killed more than a quarter of a million people was declared in Somalia, aid agencies warned Sunday the country faced a new catastrophe without urgent aid.
News Keydmedia Online
20 July 2014 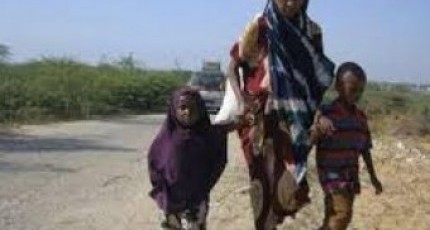 A joint statement issued by a group of charities and aid agencies said there were more than 300,000 malnourished children in Somalia and a total of 2.9 million people in need of life-saving help.

“Aid agencies today caution, again, that the signs of a drought are re-emerging in Somalia and urge for these not to be ignored in order to avoid a relapse into the conditions of the 2011 catastrophe,” the statement said, warning that without funding, aid programmes were likely to be forced to shut down.

The charities said the number of people in crisis in the war-ravaged country was expected to rise as conditions worsen, with 1.1 million externally displaced people the hardest hit.

“Most affected people are still recovering from the massive losses of the 2011 drought and famine. This time, we must not fail the people of Somalia,” said Francois Batalingaya, World Vision’s country director for Somalia.

The agencies called for “urgent and consistent” support over the next three to six six months to avoid a recurrence of the 2011 disaster.

The United Nations had warned earlier this month that the food crisis was expected to spiral into “emergency phase” in the capital Mogadishu, just one step short of famine on its classification scale of hunger.

In May 2014, only 12 percent of Somalia’s annual humanitarian needs had been funded out of a required $933 million (690 million euros), the joint NGO statement said.

The percentage has since risen to 27 percent — still well short of target, the agencies said. “The current funding gap means that programmes addressing these needs and delivering vital basic services are at risk of shutting down.”