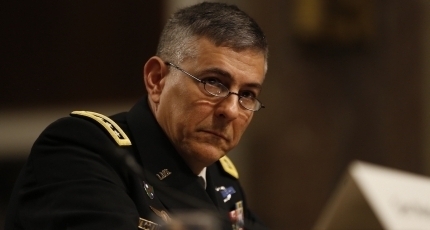 WASHINGTON — The top general of U.S. Africa Command told a Senate panel on Thursday that the Trump administration’s decision to reposition troops outside of Somalia has created fresh challenges in the fight against al-Shabab terrorists.

“Our understanding of what's happening in Somalia is less now than it was when we were there on the ground, physically located with our partners,” he told senators at a briefing to review the U.S. military posture in Africa, as well as where U.S. Central Command operates in the Middle East and parts of Asia.

In early December, former President Donald Trump ordered the roughly 700 U.S. troops in Somalia to leave the country. Troops were there to assist the East African nation’s military with its battle against al-Shabab terrorists.

AFRICOM announced in mid-January that the withdrawal was complete. Most of the troops were relocated to neighboring countries to continue carrying out the mission to defend against the al-Qaida-aligned terrorist network.

Townsend said Thursday that a “small footprint” of about 100 troops remain in Mogadishu, the nation’s capital, where their work is tied to the embassy.

While some service members are on the ground full time, others “commute to work,” he said.

“We work virtually with our partners from our bases in the region. And then we fly in to conduct training and to advise and assist our partners. We've done four such operations in the last roughly 90 days. One of them is ongoing right now,” Townsend said.

He also said he’s providing input to Defense Secretary Lloyd Austin on the future of the U.S. military in Somalia as a posture review continues.

President Joe Biden directed in early February that the Defense Department conduct a review of America’s global military posture. The “global posture review” will examine where and how many U.S. armed forces are stationed throughout the world, as well as resources and strategies, according to the Pentagon.

Al-Shabab is not the biggest concern in Somalia now, but rather the “political dysfunction that exists between the federal government of Somalia, and the federal member states … the extra-constitutional extension of the president’s term in office — that’s our biggest challenge, I think, right now,” Townsend said in response to a question from Sen. Jack Reed, D-R.I., the committee chairman.

The Somali Federal Government this week extended the mandates of the president and parliament by two years, Reed noted in his opening statement.

“This move directly undermines the progress made on democratic processes and institutional reforms and may threaten international support,” the senator said.

Sen. Jim Inhofe of Oklahoma, the top Republican on the committee, also voiced concern over the previous administration’s decision to pull the majority of forces from Somalia.

Inhofe asked Townsend whether an “over the horizon” counterterrorism strategy in Somalia makes combatting insurgents there more difficult.

The general responded: “It makes it more difficult, it doesn’t make it impossible.”