Despite close ties with Somalia, Turkey classifies Somaliland as an independent state

Turkish authorities classify Somaliland, an autonomous region in northern Somalia that unilaterally declared independence from Somalia in 1991, as an independent state, according to an official document obtained by Research and Monitoring Network Nordic Monitor. However, Turkey does not officially recognize Somaliland along with the international community. 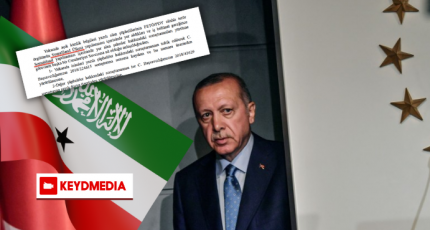 In a judicial document dated December 13, 2018, Ankara Public Prosecutor Birol Tufan launched a terrorism investigation into critics of Turkish President Recep Tayyip Erdoğan who were residing in Somaliland, which he clearly indicated was a sovereign state by using the same expressions for Somaliland as he used for other countries. 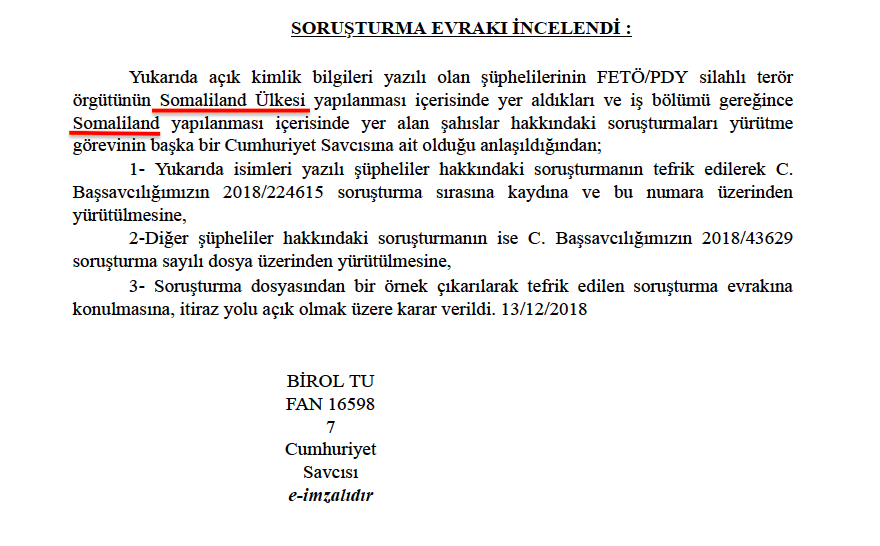 The Stockholm-based paper Nordic Monitor revealed that the Turkish Foreign Ministry had sent lists of 4,386 Erdoğan critics to the Ankara Chief Public Prosecutor’s Office, the national police and Turkey’s intelligence agency MIT on February 19, 2018, for further administrative or legal action, the punishment of their relatives back in Turkey and the seizure of their assets.

The interesting part is that ties between Turkey and Somalia, from which Somaliland is seeking independence, are very good. It might even be claimed that it is one of the few countries in the world with which Turkey has problem-free relations. So much so that last August, the anniversary of Erdoğan’s first visit to Somalia was officially celebrated.

Erdoğan has shown a great interest in Somalia since 2011 and ordered the construction of Turkey’s largest embassy compound in the world in Mogadishu while also building a military training center and military school. His associates secured the operating rights of both the airport and port facilities. His government financed an important number of humanitarian projects through state agencies. The most-visited in the country, which was named after Erdoğan, also helps keep him popular. Most recently, the Erdoğan government  in July decided to donate $30 million to Somalia in an international agreement signed between the two countries. Last year, the Turkish government paid part of Somalia’s debt to the International Monetary Fund (IMF).

Turkey considers the Somali army a guarantor of its presence in the vulnerable and fragile African country and is continuing its assistance by donating military equipment and training army personnel. Through its military training base and defense industry cooperation, Turkey is aiming to expand its political influence and military involvement in Somalia and the Horn of Africa. Following the withdrawal of African Union Mission to Somalia (AMISOM) troops in December 2021, Turkey will become a dominant factor in shaping the Somali army.

Some Somaliland politicians express concern that Turkey’s military support to Somalia might turn against them in the event of possible violence between the two parties.

Turkey also has close relations with Somaliland. The embassy in Mogadishu has an accredited consulate general in Hargeisa, the capital of the Somaliland region. NGOs, which operate as the long arm of Erdoğan in Africa, are active in Somaliland. The jihadist-linked Maarif Foundation, a Turkish-government-funded entity, runs several schools in Somalilang region.

In 2013, Turkey played the role of mediator between the two sides and gathered their representatives in Ankara. Hassan Sheikh Mahmud, then president of Somalia, and Ahmed Silanyo, then president of Somaliland, met in Ankara on April 13, 2013. However, Turkey is not continuing in this role and did not take part in a 2020 summit in Djibouti between the two sides.

An article that appeared in the Somaliland media following the summit claimed that the withdrawal of Turkey from its mediation role would be a big blow to Somalia, whose position of pursuing reunification with Somaliland is overtly supported by Turkey.