The Somali government, fractured by infighting and power wrangles in the face of elections, gave no details of what Mr Mulongo, a former member of Uganda’s Parliament, had done or omitted to do. 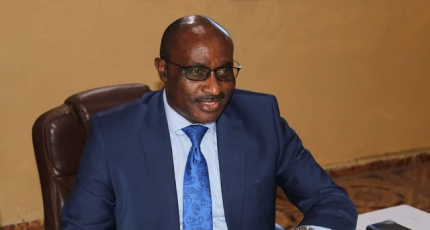 MOGADISHU, Somalia - The Federal Government of Somalia yesterday expelled Ugandan diplomat Simon Mulongo, giving him a week to leave the war-torn Horn of Africa country, after declaring him persona-non-grata.

In a November 4 letter to the African Union headquarters in the Ethiopian capital, Addis Ababa, and copied to Amisom head office in Mogadishu, Somalia’s Foreign Affairs ministry, without providing specifics, noted that:

“…the individual listed below (Mulongo) is designated ‘persona-non-grata’ and ordered to leave Somalia within seven (7) days, for engaging in activities incompatible with Amisom’s mandate and Somalia’s security strategy.”

The Somali government, fractured by infighting and power wrangles in the face of elections, gave no details of what Mr Mulongo, a former member of Uganda’s Parliament, had done or omitted to do.

Speaking to this newspaper by telephone from Mogadishu last night, Mr Mulongo said “this [expulsion] is a surprise because I know I have done no wrong”.

“The language used [in Somalia government’s diplomatic note] contains block phrases whose details and meaning I don’t know. I have no [known] reason [for the decision]. I have no idea what this is about. I want to deal with facts, not rumours,” he said in response to our inquiries why he has been ordered out.

Asked what next, the deputy special representative of the African Union chairperson in Somalia said: “My institutional leadership will provide guidance…I can’t begin speculating”.

Highly-placed political and security sources in Somalia told this newspaper last night that kicking out foreign diplomats, sometimes at the instigation of office rivals, is a modus operandi of the Somali government.

“The declaration of Simon (Mulongo) as person-non-grata is not surprising; it has happened to other diplomats before. Sometimes when people in international organisations have differences at the workplace, they get allies in the Somali government to engineer the expulsion of rivals,” a source said last night.

On other occasions, foreign workers are kicked out for expressing diplomatically unconventional views or openly criticising the government of Somalia that, despite massive external support, is struggling to rein in al-Shabaab fighters and stabilise the country.

“Mr Haysom has violated diplomatic rules and acted as though he is the head or the ruler of Somalia. He is a shame to the conduct of the UN and has violated the sovereignty and independence of Somalia,” Somalia’s Foreign Minister Ahmed Isse Awad said then, according to the BBC.

The diplomat had questioned the killing by Somalia’s security forces of 15 and the detention of 300 protestors allied with ex-militant Islamist Mukhtar Robow, the UK public broadcaster reported.

The Amisom leadership dismissed the dossier as full of misrepresentation of the mission’s work and achievements.

When the then African Union Commission chairperson, Dr Nkosazana Dlamini-Zuma, on October 7, 2015, tapped Mozambican diplomat Madeira as a special envoy to Somalia, the purpose was clear: “give a new impetus to the campaign to neutralise al-Shabaab and other terrorist groups”.

Amb Madeira, who is experienced in counter-terrorism efforts, has been in the job for six years and Al Shabaab, designated by the United States as a terrorist group, has become stronger and bolder while the political centre of the country cannot hold despite calls for foreign forces to exit.

In May 2020, garoweonline.com reported that 18 Somali members of Parliament had petitioned AU headquarters in Addis Ababa to remove Amb Madeira, whom they accused, among others, of “unchecked violation of Somalia’s sovereignty…”

The allegations were not independently proven and we could not ascertain the veracity. Following yesterday’s decision by the Somali government to expel Uganda’s Mulongo, appointed as deputy AU chairperson’s special representative in August 2017, sources in Mogadishu said he and Amb Madeira had a frosty relation.