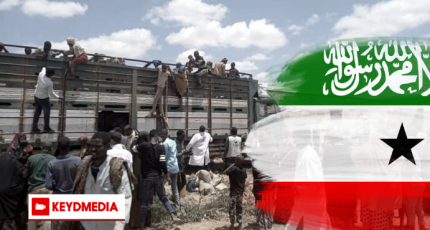 MOGADISHU, Somalia - A UN agency says 7,250 Somali people, among them children have been evicted from Las Anod, Sool regional capital and its environs since early this month.

The UN Office for the Coordination of Humanitarian Affairs (OCHA) said in a statement on Friday that 75 people left Erigavo for Galkayo and Baidoa after a notice issued by authorities.

Somaliland has ordered the 400 families or 2,400 people from southern Somalia to leave by October 21st, according to the UN OCHA in Somalia. The forceful eviction is still underway.

Over 3,300 displaced people from Las Anod arrived in Galkayo on 2 October when the forced displacements started, of whom 986 proceeded to Southwest, Hirshabelle, and Banadir.

Another 32 families (75 people) arrived in Margaga settlement in the outskirts of Ba’adweyn town, 50km northeast of Galkayo. On 14 October, they were airlifted to Baidoa. Since 10 October, 561 displaced families (3,366 people) have arrived in Baidoa.

The Somali government has strongly condemned the evictions in Somaliland, calling them inhumane. But Somaliland officials defended the move and said it was for security reasons.

Some reports suggest that Somaliland took the action after having seen the southerners have been making progress in the buinesses, overtaking the locals, posing a trade competition.