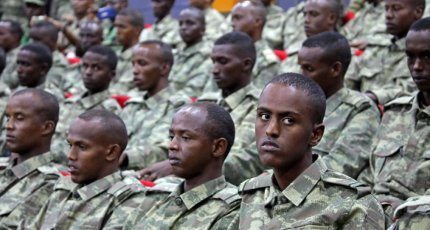 NEW YORK, US - The UN human rights council has released a report on the current situation in Ethiopia's northern Tigray region following last year's ENDF offensive against the TPLF.

The Report of the Special Rapporteur confirmed that Somali soldiers were moved from military training camps in Eritrea to the front line in Tigray during the conflict that left thousands of people dead, mostly civilians.

This comes as families in Somalia are seeking the whereabouts of their sons who were secretly sent to Eritrea for training in 2020 by top leaders of the Federal Government, mainly Fahad Yasin Yasin, the head of the intelligence.

The Somali soldiers, according to the UN report were accompanied by Eritrean troops as they crossed the Ethiopian border and they have been seen fighting around Aksum against The Tigray People's Liberation Front (TPLF).

The Government of Somalia denied the claims by a former deputy NISA boss Abdisalam Guled that the soldiers it sent to Eritrea have participated in the Tigray conflict and hundreds of them were killed in the war.

The Somali parliamentary committee has demanded an explanation from the outgoing President of Somalia Mohamed Abdullahi Farmajo on the whereabouts of the Somali troops sent to Eritrea but he remained silent on the matter and didn't respond to calls.

The UN Special Rapporteur was informed that the foreign affairs and defense committee of the Parliament had called on the head of State to dispatch a fact-finding mission to Asmara for an investigation. The exact number of the missing Somali soldiers is yet unaccounted for.

The Somali soldiers have never returned home as the Ethiopian Prime Minister Abiy Ahmed announced On 26 March 2021 that Eritrea had agreed to withdraw its forces from Tigray and the Ethiopian border. However, they didn't pull out until now, per the report.