The international partners highlighted the importance of promoting dialogue for reconciliation, security, and development in Galmudug. 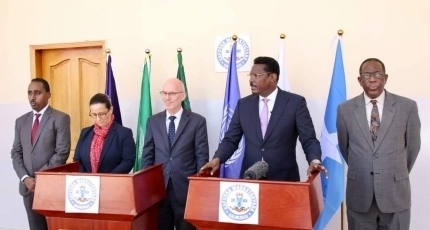 DHUSAMAREB, Somalia - UN envoy to Somalia James Swan arrived in Dhusamareb on Wednesday for talks with Galmudug officials on the upcoming elections in the country.

Swan accompanied by other foreign diplomats held a meeting with regional leader Ahmed Abdi Karie [Qoor-Qoor] at the presidential palace, discussing a range of issues, among them the forthcoming election in Somalia and the security.

The visit which is part of the regional tour focuses on the speed-up of the implementation of the May 27 electoral agreement signed between Somali PM Mohamed Hussein Roble and leaders of the Federal States in Mogadishu.

The international partners have urged Somalia's political leaders to sustain the 27 May agreement momentum towards holding the much-delayed parliamentary and presidential elections swiftly without further postponement.

The Prime Minister of the country Roble who is tasked with the implementation of the poll deal is facing numerous challenges that must be resolved in a short time to allow the country to go to the polling stations in July 2021.