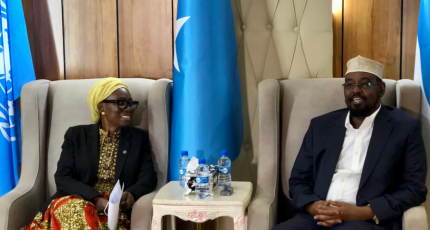 KISMAYO, Somalia - The Deputy UN Special envoy to Somalia Kiki Gbeho has arrived in Kismayo, a port city in the south of the country on Tuesday ahead of the Lower House vote.

Upon arrival, she held a meeting with Jubaland state president Ahmed Madobe and discussed a range of issues, including the women's 30 percent representation in the next parliament.

Madobe before receiving the UN official has released the list of eight candidates vying for the remaining four Senate seats, reserving two seats for women to ensure the 30% quota.

Jubaland announced it will hold the election for senate seats next Thursday, to complete the voting exercise for its eight senators who will join the 11th Federal Parliament of Somalia.

Somalia is currently facing numerous challenges that have led to delays in the elections, including the rift between the president and PM over control of the country and security concerns.

Despite these challenges, women’s rights groups in Somalia are demanding their fair share in politics as the country is trying to stand back on its foot after three decades of conflict.