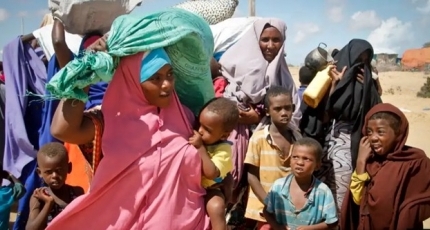 MOGADISHU, Somalia - Drought conditions in Somalia are worsening despite rains in parts of the country, a top United Nations humanitarian official said.

Ian Ridley, head of the U.N. Office for the Coordination of Humanitarian Affairs (OCHA) in Somalia, says the recent rains are not enough, and the drought situation is deteriorating in the country.

“There is not nearly enough rain, so we are calling it very low rainfall for the season,” Ridley told VOA Somali in an interview that aired Tuesday.

“Importantly, this comes on top of failed or low rains in the last two rainy seasons,” he said. “We are now in the third rainy season where the amount of rainfall is below average, and that is why the drought situation is worsening through the country.”

“The overall availability of water is very, very low, and what we are seeing, as a result, is pastoralists are moving with their animals in search of water,” he said.

He said people are being displaced, with some traveling 30 or 40 kilometers from rural areas in search of water in urban centers.

He said another impact of the drought is outbreaks of certain diseases. The incidence of acute water diarrhea and cholera is increasing; the incidence of measles is increasing as people come together in IDP [Internally Displaced Persons] camps, he said.

OCHA has just conducted a rapid assessment of the situation. Ridley says preliminary data shows that almost 3 million Somalis are feeling the impact of drought, and more than 100,000 people moved in search of water.

Somali Prime Minister Mohamed Hussein Roble declared a state of humanitarian emergency in the country last month because of the drought.