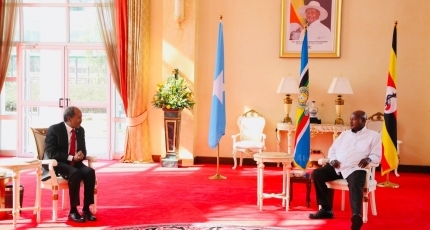 KAMPALA, Uganda - The Ugandan President Yoweri Museveni and his Somali counterpart Hassan Sheikh Mohamud want the United Nations Security Council (UNSC) to lift an arms embargo on the Horn of Africa country to build the capacity to manage its security mandate.

In a joint communique, the two heads of State said they "appreciated the support of the Security Council in the stabilisation efforts in Somalia but called upon the UN body to consider lifting the arms embargo to enable the country to shoulder her security responsibilities".

President Mohamud has been in Uganda for a three-day State visit since Monday, where he held bilateral talks with his host at State House Entebbe on August 8.

The communique released after the talks and signed by Uganda's Foreign Affairs Minister Gen Abubaker Jeje Odongo and his Somali counterpart Abshir Omar Jama also touches on other areas of mutual interest, including trade and investment.

Uganda has been crucial to Mogadishu's internal security, as it is one of five troop-contributing countries to the Atmis.

The two heads of State also called upon the international community to continue supporting Somalia in building its institutions, especially the SNA and police, to ensure that the progress and gains made from the capacity building by the AU forces are consolidated.

They said adequate, predictable and sustainable funding to support Atmis and SNA is what the global community needs to guarantee.

While in Uganda, at the invitation of President Museveni, the Somali leader attended the first ever Uganda-Somali Investment and Business Summit, taking place from August 9-10 at Speke Resort, Munyonyo.

President Museveni pledged his support to Somalia on its bid to join the East African Community that, besides Uganda, also includes Kenya, Tanzania, Rwanda, Burundi, South Sudan and the latest entrant, the Democratic Republic of Congo.

Somali-owned businesses based in Uganda and other EAC states are upbeat about the summit, coming just a fortnight after leaders of the EAC agreed to fast-track Somalia's admission to the bloc, offering an opportunity to invest and do business in the region.

Money transfer company Dahabshiil, one of the key participants in the summit and with a presence in Uganda, said the two-day event is an opportunity to explore and deepen trade and investment opportunities.

"This business summit between governments and business communities is vital because it not only opens up opportunities for business people to interact but also gives us a chance to understand the challenges our people in this region face," said Dahabshiil, chief executive officer Abdirashid Duale.

Other Somali big names at the summit include real estate entrepreneur Amina Hersi, also based in Uganda but with roots in Kenya, Somaliland and Somalia, boasting of a myriad of flourishing businesses such as Atiak Sugar Factory and commercial properties in the capital.

Somalia is currently suffering a devastating drought and food insecurity, and the summit is seen as an opportunity to learn ways of addressing the challenges through public-private partnerships.

According to SomInvest, the Horn of Africa country's investment promotion agency, Somalia is looking at the region and beyond to attract investors in renewable energy to boost power generation capacity. According to assessments by the African Development Bank (AfDB), renewable energy is "a viable and the immediate way to increase affordable energy for Somalis".

Others are lawmakers and other State officials. Somalia's Ambassador to Uganda, Ali Mohamed Mohamud, is also part of the delegation. 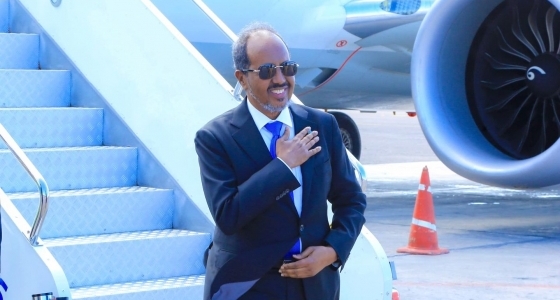 Al-Shabaab in big retreat as offensive advances in central Somalia