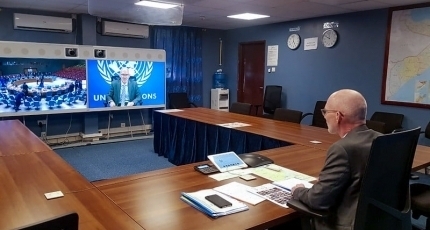 MOGADISHU, Somalia - The UN has warned on Tuesday that if the talks in Mogadishu are stuck then all previous efforts to resolve Somalia’s electoral standoff with the government and regional states leaders will have been wasted and called for compromise.

While briefing the UN security council on the current situation in Somalia, James Swan, the Head of UNSOM called for consensus on the disputed issues to hold elections in the shortest time possible.

Swan told the UNSC that if the parties in Somalia fail to commit to a clear way forward, Somalia will plunge into another chaos that risks the past gains made in security, economic, and development sectors.

He added that the international community has largely stood united behind diplomatic efforts to keep the Somali parties unified and make progress against a more insidious security threat – namely, the Al Shabaab.

The terror group, the UN envoy said still continues to plan and execute complex attacks across Somalia, including car bombings targeting upscale hotels and government buildings as well as civilians targets in the capital.

Swan warned the consequences resulting from a lack of progress on key national priorities as Somali leaders gathering in the capital for the 5th day in a row to iron out their differences over the electoral process.