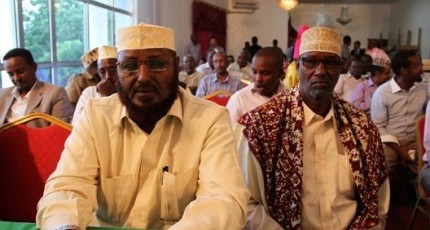 Under the leadership of the Federal Government, representatives from the region signed a document in which they stated that they would work together towards the establishment of a new administration in central Somalia. The signing was witnessed by Envoys and senior representatives of the African Union, the European Union, the Intergovernmental Authority on Development (IGAD) and the United Nations.

“Though this is only the first step in a process of state formation in central Somalia, it is a sign of the country’s progress towards meeting the goals set out in Vision 2016 and the Provisional Federal Constitution,” SRSG Kay said. “The process of federalism is aimed at building a stronger, more united and peaceful Somalia.”

“Forming an inclusive administration in central Somalia will not be without its challenges, but these can only be resolved through consultation, dialogue and negotiation involving all parties,” he added. “I urge in particular the full participation of women in the process. It is also vital that the creation of a regional administration is done in a way that protects the interests of both emerging and existing administrations.”

“As a witness to today’s agreement, the United Nations is committed to supporting the Federal Government’s peace-building and state-building efforts,” Mr. Kay said.