US military officials visit a border town in Somalia

The US Africa command suspended counter-terrorism operations in the country last January before Biden stepped in the White House. 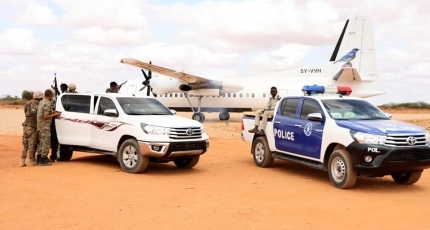 DOLOW, Somalia - As the Pentagon mulls to send troops back to Somalia, senior experts and instructors from the US Africa Command (AFRICOM) arrived in the Dolow near Kenya's border.

The American military commanders were welcomed at Dolow airport in the Gedo region on Tuesday by Somali government officials and SNA officers and escorted to the city's administrative headquarters, where they held a meeting on the ar against the A-Shabaab.

The planned military operation is said to be aimed at reopening roads in the region and small areas where Al-Shabaab members are currently stationed and blockaded the supply routes.

The US Africa Command has suspended all counter-terrorism operations in the country last January under Trump's executive order before Biden stepped in the White House.

Military sources in Gedo revealed to Keydmedia Online that AFRICOM is planning to set up a base in the border town of Dolow, where the US. forces will use as a launchpad of the drone strikes against Al-Shabaab in the Middle Jubba region.

The U.S. military also wants to protect its Manda Bay base in Kenya from Dolow town inside Somalia after last year's Al-Shabaab attack on the Air Strip that killed at least three Americans, one soldier, and two contractors while several others were wounded.

The AFRICOM has been playing an active role in the fight against Al-Shabaab, providing air support to Somali and AU forces on the ground. The U.S. military trained special Somali forces known as Danab who are stationed in Beleddogle airbase in the Lower Shabelle region.