We will not accept Farmajo to stay in power anymore, says ex-leader

He went on to speak on behalf of Somalia's 8th President Hassan Sheikh Mohamud and suggested that self-confidence be shown in order to clear the ballot box as he put it. 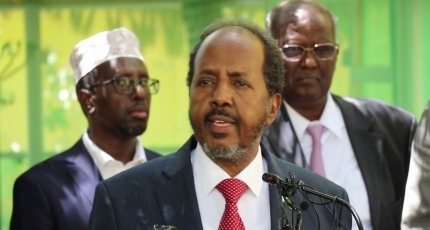 MOGADISHU, Somalia - Former Somali President Hassan Sheikh Mohamud has again spoken about the plot by the outgoing leader Farmajo to remain in power for life with no election.

Speaking at an opposition conference held in Turkey, Mohamud said Farmajo has thrown the country off its course of holding an election every 4 years when the leader's term ends.

"Our constitution stipulates there should be an election every 4 years to elect a new president in a timely and democratic vote. The seat belongs to all Somalis, not a person," he said.

The 8th president declared his candidacy for the presidency again, facing the incumbent Farmajo who has an influence in the ongoing indirect parliamentary election in Somalia.

Mohamud went on to speak on the delayed elections that have been dragging since the start of 2021. He called on the PM to accelerate the process to avoid Somalia plunging into chaos.

"On Feb 8, 2017, I left Villa Somalia as president but at night I returned as I'm ex-leader. It's not necessary to stick to power illegally. Observance of the rules is important," he added.

After his tenure expired, Farmajo worked on a plot to stage a bloodless coup in April this year but was averted by the National Salvation forces following days of clashes in Mogadishu.