What does Janan’s surrender mean to Madobe?

While serving as Jubbaland Security Minister, Janan was detained at the Mogadishu Airport upon his arrival in August 2019 for serious human rights violations, torture, and extrajudicial killings in Gedo province. 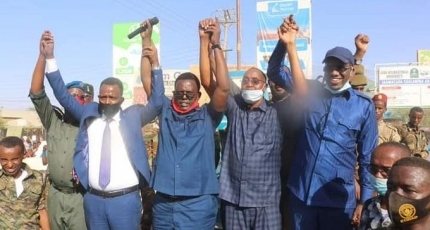 MOGADISHU, Somalia - Abdirashid Janan, Jubbaland's security minister, who was fighting against the federal government, surrendered on Wednesday in the border town of Beled Hawo, Gedo region.

The surprise decision by Jubaland security minister Abdirashid Janan to surrender himself to the Somali government on Wednesday is is a slap on the face of Madobe and the beginning of political turmoil inside his administration.

The defection ends arguably a year of a manhunt for the country’s most wanted man who reportedly escaped from a prison run by the Somali Intelligence Agency in Mogadishu on 28 January 2020.

Janan who hails from the same clan of outgoing Somali president Mohamed Abdullahi Farmajo has been waging war in Gedo against the government after Jubbaland lost key towns to Somali national army (SNA) forces last year.

While serving as Jubbaland Security Minister, he was detained at the Mogadishu Airport upon his arrival in August 2019 for serious human rights violations, torture, and extrajudicial killings in Gedo province.

After serving almost five months in NISA jail, he managed to escape and return to Gedo, then crossed into Kenya’s Mandera, where he mobilized soldiers armed by KDF before attacking Beled-Hawo.

It was the biggest fighting he engaged in with government forces in the town on the Somalia-Kenyan border.

The civilians suffer the most as his forces launched an offensive to retake control of Balad-Hawa from the Turkish-trained Gorgor soldiers who preventing him from takeover.

Shortly after the news of Janan's give up surfaced, Amnesty International has issued a statement, saying: "Now that Abdirashid Janan is in the hands of the federal government of Somalia, authorities must ensure justice and accountability for all the alleged human rights violations he committed in Gedo. Victims and impacted families deserve justice".

According to reliable sources, Janan has defected from his boss Ahmed Madobe on a condition of guarantee his safety and an offer of $2.3 million by NISA head Fahad Yasin, who welcomed him in Beled-Hawo.

Janan is due to be flown to Mogadishu in the coming hours to materialize the deal he reached with the Somali government, where he will proceed with his travel to Turkey to reside.