What former president has to say about the election conference?

He mentioned that reaching a unanimous agreement is solely the only path that could save the country from future uncertainty, he said, is endangered. 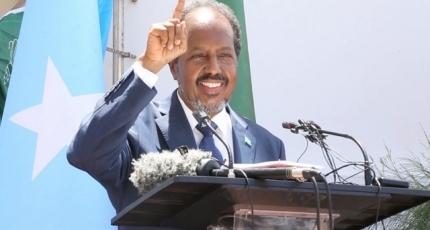 MOGADISHU, Somalia -- The former President of Somalia, Hassan Sheikh Mohamud has shown good outcomes from the ongoing discussion between the federal state members and the central government spearheaded by the acting PM, Mohamed Hussein Rooble in Afisyoni Camp.

In a statement he released, the ex-President said the moral of the engagement sends a signal of hope and reclaims the lost public confidence in the poll talks pledging support to the caretaker PM Roble.

“In the past lesson that his history taught us is that engaging in talks in a good manner wholeheartedly to help the nation reassure its future is priceless,” he said – calling on political stakeholders, civil society groups, and donors to never give up and underestimate the process.

He mentioned that reaching a unanimous agreement is solely the only path that could save the country from future uncertainty, he said, is endangered.

Hassan reiterated that the division among the troops and government institutions whose terms ended is not the only raising concern, but rather who could be in charge of the country when the time of the election comes.

The election conference has entered the third day with good signs of hope shown in the discussion so far as the leaders have reportedly gone through some of the barriers surrounding the talks.