What we know about Somali PM’s maiden trip to Qatar?

Qatar has had an influence in the Farmajo administration for the past 4 years after funding the president's election campaign in early 2017. 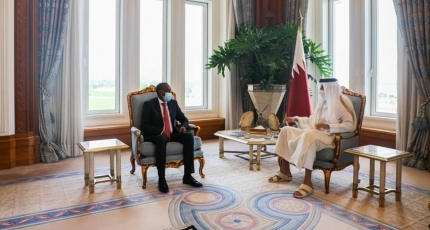 DOHA, Qatar - The prime minister of Somalia Mohamed Roble has on Monday evening landed in Doha on an official visit to Qatar, a Gulf country that maintains close ties with Farmajo.

The Somali premier and his Qatari counterpart jointly chaired a meeting in which every minister in Roble's delegation faced his counterpart, discussing cooperation between the two sides.

Qatar sees the current dispute as a threat to its interests in Somalia. The insiders say Doha is using any possible means to end the rift and convince Roble to back Farmajo's reelection bid.

Doha has been a key ally to Farmajo throughout his four-year tenure ended in February this year and now it seeks to fund his campaign to stay in power for another fresh term.

Hassan Ali Khaire, former Somali PM, who is currently vying for president held a press conference on Mogadishu on Tuesday, warning on foreign interference in the elections.

Khaire was booted out of the office through a no-confidence motion engineered by Farmajo which was passed by the parliament in July 2020 while he was in Dhusamareb election talks.

Due to the lack of a strong government, Somalia experienced continued meddling in its elections, mainly from UAE and Qatar which usually fund certain candidates to win the election.