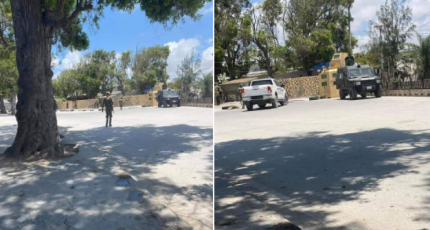 MOGADISHU, Somalia - The situation at the NISA HQs in Mogadishu returned to calm after clashes erupted between rival forces loyal to Farmajo and Roble on Wednesday morning.

The country's intelligence agency now became the flashpoint of the dispute between the outgoing president and PM Roble who are fighting for control, pushing the country into conflict.

Farmajo challenged the PM's appointment of Bashir Goobe as new acting NISA director and picked Yasin Farey to replace Fahad Yasin, who was sacked on Monday over Ikran Tahlil's case.

The PM's pick was denied entry into the NISA compound by the Eritrean-trained Duufaan troops under Fahad Yasin, turning the gridlock into a violent clash that raged on for several minutes.

On Wednesday, Sep. 8, the situation in Mogadishu has entered unprecedented terrain, and the top leaders are dividing the country's armed forces into clan lines for their personal gains.

The infighting has resulted from the disappearance of NISA officer Ikran Tahlil on June 26. Things got worse after the spy agency announced last week that the girl was killed by Al-Shabaab.

The US-funded NISA was used by Farmajo to oppress his critics and silence the independent media dared to cover the corruption, nepotism, and violation of human rights in his government.

PM Roble who came to office last year was trying to fix all issues and lead the country to peaceful and inclusive elections this year but his efforts faced challenges from Farmajo.