Al-Shabaab carries out attack in Kenya

Kenya faced attacks in Nairobi and Garissa since it sent troops to Somalia in 2011. 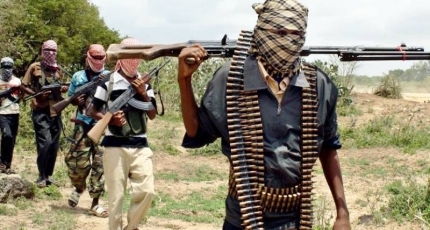 NAIROBI, Kenya - A father and his son were Sunday morning killed when suspected al-Shabaab militants attacked a vehicle between Jabibar and Bamboo in Mandera North, police said.

The two were driving in a Landcruiser when the attack happened on the Rhamo-Elwak road, police said adding three other passengers on board were Injured in the attack.

Mandera County Commissioner Onesmus Kyatha confirmed the incident and said a reinforcement had been sent to the area to pursue the attackers.

Locals said the gang was after the vehicle for use in Somalia where they are facing pressure from the local administration.

The NPR officers who were heading to Gari village are nursing injuries at Rhamo Sub-county Hospital, police said.

Witnesses said the gang opened fire on the speeding car after the driver refused to stop.

The area is near the Kenya-Somalia border and is facing constant attacks from terrorists.

This comes days after the terrorists stole a four-wheel drive car belonging to a Mandera resident.

The vehicle was rented by a local agency -Action Against Hunger- operating in Takaba for a medical campaign and was attacked between Elram and Falama areas south of Mandera when it was robbed on December 8, 2022.

It was hijacked with one occupant on board while transporting the measles vaccine to Falama health centre in Mandera South, police and locals said.

Other officials said the vehicle left Kotulo and was to transport measles vaccine and food supplements called plumpy nuts or Malado to Gesrebki Teno village of Falama Sublocation, Garsesala Location across all the facilities in the area ahead of a planned vaccination exercise that shall kick off Friday, December 9.

The driver who was on board the car is missing, police said.

The four gunmen struck and drove with the car and driver on board to Somalia direction. Early last month, an ambulance belonging to the Mandera County government was carjacked along Lafey-Elwak road and the efforts to rescue it bore no fruits.

The four occupants of the ambulance were later released after spending two days in Somalia.

The area has been facing attacks and threats from the militants who are roaming there.

Elwak is near the Kenya-Somalia border and is usually breached by terrorists who attack at will.

The border region has borne the brunt of repeated attacks from the militants who are at times aided by residents.

The terrorists at times plant explosives on the routes used by security agencies and attack them.