Eritrea trained 5,000 soldiers from Somalia whose training caused a political debate in the country during the last year's electioneering period. 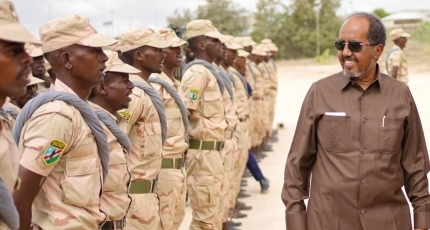 MOGADISHU, Somalia - President Hassan Sheikh today visited soldiers trained in Eritrea at the General Gordan camp in Mogadishu for the first time since their return in December 2022.

The soldiers estimated hundreds have been absent from the country for three years as they underwent clandestine training in Eritrea, where they faced hardships due to living conditions.

Speaking to the troops, President Hassan Sheikh said the country is currently at war with Al-Shabaab and they will take part in the ongoing military operations to liberate the whole nation.

I and the Somali people are happy about your return. From today onwards we are going to prepare and move to face the enemy [Al-Shabaab]. We want to regain control of the missing areas faster than the previous time, and to be completed the operation in a short period of time," said President Hassan Sheikh.

The Eritrea-trained commando forces have been returning back to Mogadishu in recent days, and some are still remained in Asmara and awaiting their flights expected by the end of this month.

Eritrea trained 5,000 soldiers sent from Somalia by Fahad Yasin, a former Intelligence director whose training caused a political debate in the country during the last year's electioneering period.