Al-Shabaab murders civilians in an attack in Galgadud

The whereabouts of some of the community elders are yet unknown or even if they are shot dead by the militants. 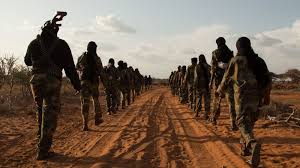 MOGADISHU, Somalia - News from Galgadud, central Somalia is saying that the al-Shabab militants conducted an ambush in an area between Celdheere and Dhusamareb, the state capital of Galmudug.

The insurgents have taken their offensive on the residence of Tula-xayow, 8 kilometers from the west of the Galmudug capital and locals stood u firmly to resist and fought back.

At least three civilians are reported to have died in the attack with many others wounded who are currently receiving medical treatments in the hospitals of Dhusamareb.

The whereabouts of some of the community elders are yet unknown or even if they are shot dead by the militants.

Al-Shabab has also burnt down vehicles and managing to escape from the fighting spot before the arrival of the federal government forces backed by Galmudug soldiers.

It's not the first the group to launch such attack in the area between Guriel and Dhusamareb conducting numerous offensives against the government troops since the Ahlu-sunna driven out of the region.