Mogadishu (KON) - The AMISOM forces in Somalia have captured another key al-Shabaab base, located about 120km North-West of Mogadishu, further fending off threats from the al-Qaeda linked group.
News Keydmedia Online
7 January 2013 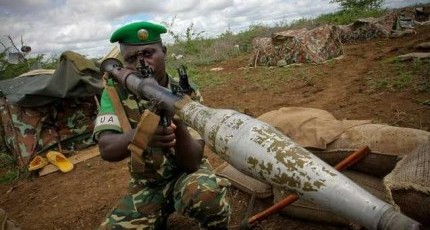 The assault took place in the thickets of the general areas of Balidoogle on Thursday. Four submachine guns and 13 fully loaded magazines, containing 390 live bullets, were recovered.

Maj. Henry Obbo, the Uganda Contingent Public Information Officer, said the Ugandan contingent of the peacekeeping force, had trailed the al-Shabaab group since Sunday, after it staged a road ambush between Balidoogle and Leego.

Obbo disclosed that the peacekeeping forces neutralised the insurgents, who had closed in 20km north east of the Ugandan contingent base of Ballidoogle.

The Uganda Contingent Commander, Brig Michael Ondoga, explained that the operation was intended to improve security of the Ballidoogle –Leego road, further weaken the insurgents and eliminate Al-Shabaab pockets in the neighbourhood.

“We cannot afford to allow freedom of activity for the enemy in areas we have captured. Issues of road ambushes cannot be handled by road patrols alone, but also by solving the problem from the source. Our operations are paying off,” he said in a press statement.

“The insurgent was in possession of several military gear, including camouflage uniforms and ranger boots. One rocket-propelled grenade bomb was also recovered from the Al-Shabaab in Gupta, Mogadishu,” Obbo said.

He noted that the AMISOM forces were mandated to use all means to support offensive action to seize, retain and exploit the initiative of hostile forces in Somalia.