Mogadishu (KON) – In the latest war against Al-Shabaab terrorists, AMISOM forces on Thursday captured a strategic militant training and planning camp in the village of Khadija Haji in Gedo region located 60 km southwest of BulaHawa along the Kenya-Somalia border.
News Keydmedia Online
25 July 2014 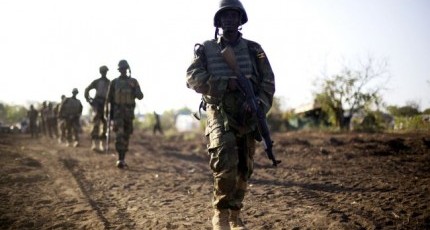 Al-Shabaab used the camp as a drawback position to plan and launch attacks on AMISOM and Somalia National forces.

In yet another offensive against Al-Shabaab terrorists, AMISOM forces in sector Kismayu on Wednesday conducted an offensive operation in Jilib town within Middle Juba region destroying Al-Shabaab logistical base. Several militant were injured during the operation.

Last week two senior Al Shabaab commanders, Issa Mohamed Dhoore the liaison officer with foreign elements and translator of Hiraan region and a close confidant of the group’s leader Ahmed Abdi Godane was killed together with Sharif Ameey also a top leader during an operation by AMISOM and SNA forces in Inimeey village located 10 kilometers from Bulla Burde.

The joint forces were carrying out cordon and search operations around Bulla Burde and its periphery when they got information of Al Shabaab meeting happening in the location.

The past week has been instrumental in the fight against terrorism in Somalia. Somali National army supported by AMISOM continue to liberate more areas and root out Al-Shabaab from their strongholds in a bid to protect the hard won security gains.