Ali Jamac Dhoodi thought his son was working as a security guard in Qatar, helping prepare for next year’s soccer World Cup. Then one day last April, officials from Somalia’s National Intelligence Agency arrived with $10,000 in cash. 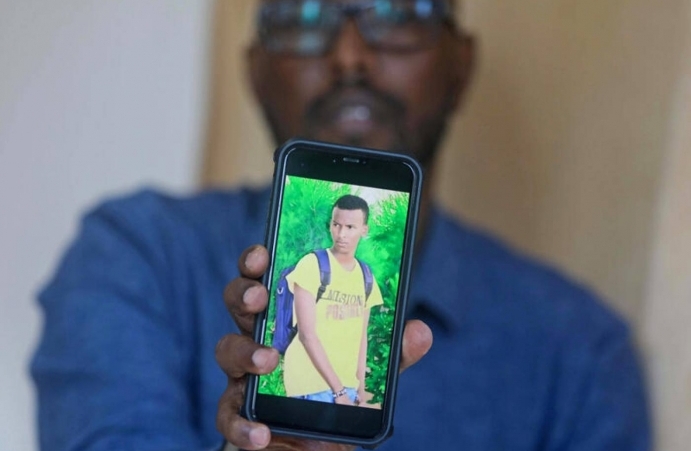 They told him his son had died - not in Qatar, but in Eritrea, one of the world’s most secretive countries.

“They showed me a picture from their WhatsApp and asked me, ‘do you know this picture and his full name?’ I said, ‘yes he is my son,’” Dhoodi, 48, told Reuters. “They said to me ‘your son died’. I cried.”

They gave him the money, and told him not to ask questions.

Ali’s son was one of three young Somali men whose families told Reuters they had been recruited by Somalia’s federal government for jobs in Qatar, only to surface in Eritrea, where they were sent to serve in a military force against their will. Two other families said their sons had simply disappeared.

The apparent secret recruitment of young Somali men for a fighting force in Eritrea is stirring public anger in Somalia, a poor country where opportunities to work abroad are eagerly sought. Protests erupted last week in the capital Mogadishu and in the towns of Guriel and Galkayo over the missing recruits.

Reports that Eritrean forces have taken part in fighting that broke out in November last year in neighbouring northern Ethiopia - which Eritrea and Ethiopia strongly deny - have led some Somalis to worry their sons may have been sent there.

Asked if Eritrea had recruited Somalis, trained them or sent them to Ethiopia, Eritrean Information Minister Yemane Meskel told Reuters: “This is ludicrous ... There is massive disinformation floating around.”

Somali government spokesman Mohamed Ibrahim and Information Minister Osman Dube did not respond to requests for comment on the Somali government’s apparent role in the recruitment, but Ibrahim said no Somalis had been sent to Ethiopia.

The leaders of Somalia, Ethiopia and Eritrea have been drawing closer together since 2018, after a change of leadership in Ethiopia. Ethiopia and Eritrea, once archenemies, signed a peace deal and have regular high level visits. Somalia - which once accused Eritrea of supporting Islamist rebels - now has friendly relations with its president.

‘A BULLET IS THE REPLY’

Hussein Warsame said his son Sadam, 21, had been recruited for a security job in Qatar in October, 2019. Nothing was heard from him for more than a year. Finally, last November, he phoned from Eritrea.

“We were all shocked to land in Eritrea. We thought we were being flown to Qatar,” he quoted his son as telling him. “Dad, there is no life here, I have not seen food save a lump or slice of bread since I left Somalia in 2019, and when recruits demonstrate or reject orders, a bullet is the reply.”

Sahra Abdikadir, whose son Aqil Hassan Abdi disappeared in 2019 under similar circumstances, told Reuters that he had called in January and said he was in a camp in an unknown location in Eritrea.

Eritrea, a heavily militarised society, has never held elections, has no independent media and forces its citizens into indefinate government service. Former guerrilla leader Isaias Afwerki has been president since 1993.

Somalia has had only limited central government rule since 1991.

Both countries have a history of decades of conflict in the Horn of Africa region, often involving their much larger neighbour Ethiopia.

A regional security analyst who asked not to be identified told Reuters he had learned from conversations with Somali security officials that about 1,000 Somalis had been recruited and taken to Eritrea in at least three groups. One group had returned to Somalia, the second group was unreachable and the third was still in Eritrea.

Reuters was unable to confirm those details.