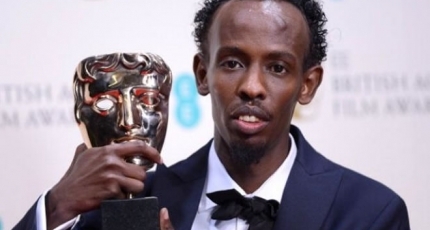 Barkhad Abdi of “Captain Phillips” fame will soon to be seen in three more film projects, including an appearance with Colin Forth for a military thriller. The Somali actor has captured the attention of the international media for rising from his humble beginnings as an immigrant in Minnesota to clinching multiple nominations from the world’s most prestigious award giving bodies.

Despite some early struggles uncovered by the press, the actor has defied the odds and is clinching projects with some A-listers.

The ex-limousine driver was said to have been casted in “Captain Phillips” for a small fee of $65,000. An amount that was spent before he began hopping from one awards show to the next, including publicity appearances in Los Angeles,

A March 2014 New Yorker article noted that he was having difficulty making ends meet and that the $65,000 he was paid for two years ago for his Academy Award-nominated role is all used up.

Earlier this year, the New Yorker run a story on the actor about his fees, noting that he was broke during his appearance at the Golden Globe and Oscars, amongst others shows, and was actually being shuttled from one place to the next in a company car. His high-end formal wear were loaners.

During the awards season Abdi reportedly asked to be house in a hotel near LAX where a friend can shuttle him around for free.

In a report by CNN, it noted that the 29-year-old actor left Somalia with his family when he was a youngster and settled in Yemen. They immigrated to the United States where they joined a large community of Somalis in Minneapolis.

Abdi was a drive for his brother’s limousine company when he answered a casting call for Somali actors for the “Captain Phillips” movie. The Guardian reported that he was also directing hip-hop videos when he responded to a casting call.

"There was an open casting call on TV and I went," says Abdi, as reported by The Guardian.

"They asked me easy questions –