Brave SNA soldiers promoted for their courageous actions of patriotism

The al-Qaida-linked militant group has recently launched attacks on military bases on many occasions including Aw-dhegle and Bariire whom they stormed before engaging in a bitter battle with the Somali National Army. 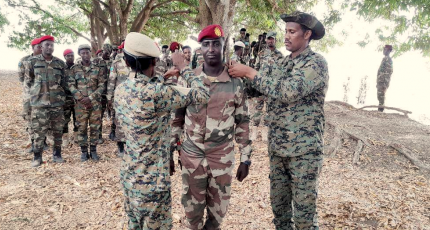 MOGADISHU, Somalia - The country’s acting Defence Minister, Hassan Hussein Haji has commended the Somali National Army for their courageous actions of patriotism in the recent heavy fighting with Al-Shabaab militants that took place in areas of Bariire and Awdhegle in the Lower Shabelle region.

Some of the leading soldiers on the forefront who bravely resisted the terror group’s offensive against the military bases were promoted with higher ranks in the military field.

The al-Qaida-linked militant group has recently stormed bases of the National Army with a car bomb full of explosives before engaging in direct fighting with the government troops that left a mix of casualties.

The government reported over 100 Al-Shabaab militants has been killed in the battle. According to phone footages that went viral on social media, the terror group suffered a heavy loss, footages show numerous dead bodies of the militants laying on the ground.

Despite being under-equipped and unpaid sometimes, Somali soldiers are tough fighters who can take the enemy grind to a halt.

Qatar has developed close relations with Somalia since Farmajo assumed office in 2017.