China meets with Somali FM on sidelines of UNGA seassion

On the eve of the 77th session of the UN General Assembly, Chinese Foreign Minister Wang Yi met with the foreign minister of Somalia, Abshir Omar Huruse. 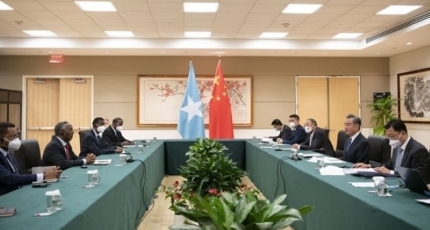 NEW YORK, US - Chinese State Councilor and Foreign Minister Wang Yi on Wednesday met with Somali Foreign Minister Abshir Omar Huruse on the sidelines of the 77th session of the UN General Assembly.

Wang said the traditional friendship between China and Somalia is an important component of China-Africa friendship.

Somalia is the first East African country that established diplomatic relations with New China, said Wang, adding that the two countries always respect each other and support each other on issues concerning each other's core interests.

China has always advocated that all countries, big or small, strong or weak, rich or poor, are equal, said Wang.

China will continue to be a reliable friend of Somalia, provide support and assistance to Somalia within its capacity so as to achieve common development and prosperity, he added.

Huruse noted China and Somalia enjoy a time-honored friendship and words are not enough to describe the friendship between the two sides, saying that Somalia sincerely thanks China for standing with Somalia at critical moments, especially for firmly supporting Somalia in safeguarding its sovereignty.

Huruse said his country firmly adheres to the one-China principle and opposes interference by any external forces in China's internal affairs. Somalia is proud to have China, a major country with significant international influence, as a friend, he added.

Developing relations with China is neither make-shift nor interests-driven, said Huruse. Although Somalia is a small country, it has never wavered in upholding its position on the international stage, he added.

Wang said China firmly supports the governance of the new Somali government and believes that Somalia's peaceful development will continue to move forward.

China appreciates Somalia's firm adherence to the one-China principle and supports Somalia in safeguarding its sovereignty, dignity and territorial integrity, he said, adding that China will continue to stand with Somalia in the international arena to support its legitimate demands.

He said China stands ready to strengthen solidarity with all developing countries, oppose unilateral bullying and jointly uphold non-interference in other countries' internal affairs, which is the basic norm of international relations.