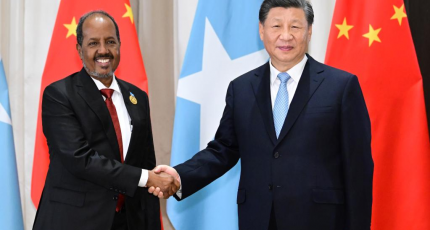 RIYADH - Chinese President Xi Jinping said here Friday that China is ready to provide assistance to the best of its ability for Somalia's reconstruction and social and economic development, and encourages the two countries' enterprises to explore cooperation in areas including agriculture, fishery and health.

China supports the Somali government in enhancing its ability to maintain stability and fight terrorism, Xi made the remarks when meeting with Somali President Hassan Sheikh Mohamud.

The Chinese side always supports Somalia in safeguarding its sovereignty, dignity and territorial integrity, has provided long-term support to the African Union Mission in Somalia (AMISOM) and actively encouraged the international community to support and help Somalia, Xi said.

China, Xi also said, is ready to work with Somalia to maintain political mutual trust, understand and support each other on issues concerning their respective core interests and major concerns, push bilateral ties to new levels and jointly safeguard the legitimate rights and interests of developing countries.

For his part, Mohamud noted that bilateral relations enjoy a long history, saying that since the establishment of diplomatic ties in 1960, China-Somalia relations have always been based on mutual understanding and mutual respect.

The Chinese side has helped Somalia build its longest highway, hospitals and other important facilities for people's daily lives, he said, adding that his country hopes for continued support from China for safeguarding national security and rebuilding the national economy.

Somalia firmly adheres to the one-China policy and remains an important strategic partner of China, he said, adding that his country will continue to stand firmly with China and support China in safeguarding national sovereignty and territorial integrity.