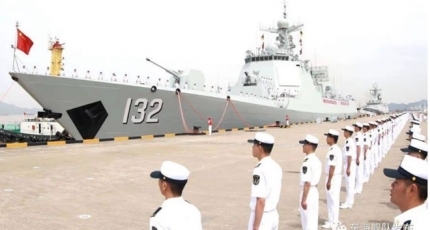 MOGADISHU, Somalia - They are sailing with the 41st fleet of the People’s Liberation Army (PLA) Navy that set out from Zhoushan, in east China’s Zhejiang province, on Wednesday, according to a statement from the social media account of the Eastern Theatre Command.

The fleet is composed of the Suzhou, an improved version of the Type 052D guided-missile destroyer, guided-missile frigate the Nantong, and the supply ship Chaohu, with two helicopters and dozens of special-operations soldiers on board, the statement said.

Type 052D – or Luyang III-class as Nato calls it – was designed to match the US Navy’s Arleigh-Burke class destroyers. It is equipped with advanced radars and electronics comparable to the US Aegis system, as well as 64-cell vertical missile launchers.

The fleet carried out a range of exercises ahead of the mission, including joint search and rescue, anti-terror and anti-piracy drills, and mock rescues of hijacked merchant ships.

The PLA Navy began conducting escort missions in the Gulf of Aden and the waters off Somalia in December 2008, mainly to fight pirates there.

This is the first escort mission for both the Suzhou and the Nantong.

Suzhou, with hull number 132, first appeared in a maritime exercise in March last year. It can carry out maritime offensive and defensive operations alone or in conjunction with other naval forces, and has strong, long-range warning and regional air defence capabilities, the navy statement said.

The Nantong (Hull 533), commissioned in 2019, is a Type 054A frigate with medium-range air defence capability, in the form of Type 382 radar and vertically launched HQ-16 surface-to-air missiles.

The ship is equipped to take part in air defence, sea and shore strikes, as well as maritime patrol, warning, and escort tasks, according to the statement.

China naval ship building has seen impressive progress in recent years. In August 2020, the PLA launched its 25th Type 052D destroyer, just six years after the first ship of its class was commissioned – in 2014.

The PLA Navy recently also put two more of one of the world’s most powerful destroyers – the Type 055 – into service. That took to five the number confirmed as commissioned in the last two years, as part of China’s plans to create a “blue-water” or high-seas navy, state broadcaster CCTV reported last month.

Its largest Type 055 stealth guided-missile destroyer, the Lhasa, recently led three corvettes in a joint services exercise in the Yellow Sea seen to be aimed at simulating confrontations with smaller regional navies.

The Type 055 is regarded as second in power only to the US Navy’s Zumwalt-class stealth ship and the PLA plans to have eight of them in service in a first batch.

In a shipbuilding spree that has given China the world’s largest navy by number of vessels, the hulls of eight Type 055 destroyers were built between 2017 and 2020. All this is part of China’s aggressive plan to build a real blue-water navy, putting together at least six aircraft carrier battle groups by 2035.