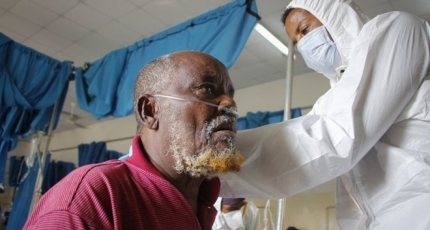 A resurgence of COVID-19 cases is hitting Somalia hard, straining one of the world’s most fragile health systems, while officials await test results to show whether a more infectious variant of the coronavirus is spreading.

In the lone COVID-19 isolation center in the capital, Mogadishu, 50 people have died in the past two and a half weeks, Martini hospital deputy director Sadaq Adan Hussein told The Associated Press during a visit. Sixty other patients admitted during the period have recovered.

“We believe this second wave is the new variant of the virus,” he said. “Earlier, when 100 suspected patients were brought to quarantine, not more than 30 of them would be positive, but now almost all of them are infected.”

Somalia’s virus infections have jumped from 4,784 to 6,549 this month alone, according to official data.

Test results for the presence of one of the new variants are expected next month, Sadaq said.

Doctors' warning had gone viral in social media earlier this week and the situation at the designated hospitals is grieve. Patients are seeing the disease in front of their very eyes and the lack of adequate facilities behind them.

The Somali government didn't just fail to cover up the reality at the hospitals but to take urgent response in deploying the needed equipments. According to doctors, one of the designated hospitals is no longer admitting new cases or patients of COVID-19.

There is not enough intensive care units and beds at Martini Hospital and the number of people infected with the virus is increasing rapidly, according to doctors who spoke with Keydmedia Online.

Doctors and nurses who are fighting the virus on the frontline are calling the government to take drastic action before it becomes deplorable.

With the government failing to act so quickly, the future of this pandemic here in the country remains uncertain to vanish soon.