Is Somalia ready to taking the responsibility for its own security?

Without underestimating the challenges, Somalis are supposed to take the responsibility for their own security irrespective of being reluctant to manage themselves. 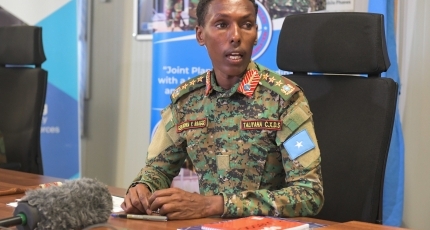 MOGADISHU, Somalia - A two-day meeting aimed to evaluate the success improvements made by the security forces in the country was held at Halane with the attendance of AMISOM, and Somali National Army top commanders.

The two sides have agreed that Somali troops should take up the leading role in the ongoing operation against Al-Shabaab militants in a move that Farmajo wants to consolodate the power.

While addressing, Ambassador Madeira said that holding this security meeting is symbolic of cooperation in the peace-building process towards the country’s stability with the National Army taking the leading role in the process of security maintenance in this defining moment in Somalia.

“We want you to know that we are determined to take up our vital role based on the agreement we had —and that, the National forces are in a position to fulfill and pledge to full commitment in advance,” said Odowa Yusuf Rage, the incumbent chief of the Armed Forces — proudly reiterating that if they are given the needed support, they are capable of making a strong stance.

Without underestimating the challenges, Somalis are supposed to take the responsibility for their own security irrespective of being reluctant to manage themselves.

Madeira is hopeful and his words are clear: “The following months will be very challenging to implement the joint-agreements reached during the meeting and moving on to the next phase in which AMISOM is expected to slowly but surely hand over security responsibility to the Somali National Army with the assurance that all the necessary facilities needed are in use to overcome the fear of future uncertainty.