Three terror convicts who escaped from Kamiti Maximum Prisons in Nairobi have been arrested. They were all arrested in one place in Mwingi, Kitui county. 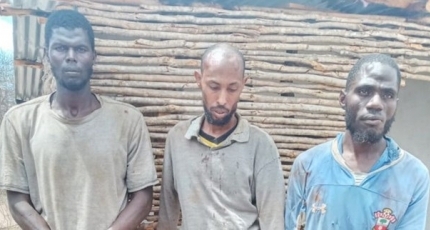 An image of them in handcuffs was immediately circulated.

They escaped on November 15 from Block A 6 where they had been held.

Directorate of Criminal Investigations chief George Kinoti confirmed the arrest and added they were being brought to Nairobi.

The DCI placed a Sh60 million bounty on their recapture. It is not clear if someone will get the bounty for the arrest of the three.

The escape led to the arrest of 13 wardens and major changes in the Kenya Prisons.

Interior Cabinet Secretary Fred Matiang'i and his ICT counterpart Joe Mucheru were set to visit the prisons on Thursday.

Matiang'i said they were making changes in prisons.

“It is true they have been recaptured in a village in Kitui as they headed for Somalia. We will know more,” he said.

Residents in a village in Kitui had reported spotting the three and that they looked tired.

They said the three, who looked exhausted and thirsty, had bought a lot of milk, bottled water, bread and biscuits from local shops and paid in cash.

They raised suspicions when they asked for directions to Boni Forest in Lamu county.

According to residents who talked to police, one of the escapees had swollen legs and was limping, perhaps as a result of trekking a long distance.

On Wednesday, President Uhuru Kenyatta sacked Wycliffe Ogalo as the commissioner-general of the Kenya Prisons Service.

In a dramatic turn of events, Ogalo and two other top officers at Kamiti prisons were arrested from Magereza building and taken to the DCI headquarters on Kiambu Road for grilling.

Ogola, alongside the commandant of Kamiti prisons, Charles Mutembei, and his deputy, was grilled by DCI officers over the escape.

He was, however, released minutes later. This followed a breach in security at the Kamiti Maximum Prison that led to the escape of three terror convicts.

The head of state made the decision on the back of a briefing from the ministry responsible for correctional services regarding the Kamiti Maximum Security Prison escape.
“The briefing noted the compelling public interest in the matter and the need to entrench accountability in the ranks of the leadership of all security organs; in honour of the many Kenyans who have lost their lives and the enormous sacrifices made by all Kenyans, and particularly the security organs to disrupt, dismantle, and defeat terror networks,” read a statement.

The President also directed Matiang’i to spare no resource in pursuing and capturing the Kamiti escapees. He urged all state investigative agencies to bring every person found to have been involved in the prison break to full account.

Uhuru further directed the State Department of Correctional Services to begin disciplinary action against all prisons staff who were on duty when the security breach occurred.

This includes redeployment and/or immediate suspension of those found culpable.

“The head of state and government has urged all Kenyans to volunteer any information that will lead to the tracing and arrest of the three escapees. He also thanked all our security personnel for their tireless and heroic work in law enforcement and counterterrorism,” added the statement.

“The President further urged all Kenyans to remain vigilant and report any suspicious activities to our security agencies; as we all have a shared duty to defend and protect our freedoms and way of life that is at risk with the rising threats of terror within the region.”

The move came after the President met with top officials at the Interior ministry led by Matiang'i over the issue. It was revealed the escape was abetted.

Ogalo is a former long-serving provincial administrator and has been in the office for two years now.  He succeeded Isaya Osugo who is credited with a number of reforms to the correctional facility.

The trio is said to have removed a stone in their cell and left a physically challenged cellmate before escaping. They then used ropes to climb out two walls.

Matiang'i said preliminary investigations suggested the escape from arguably the most secure maximum prison in the country was abetted by laxity and incompetence and vowed more arrests and prosecutions would follow after the DCI moved in to investigate the prison break.

“We will not only go the direction investigations will point us but we will act resolutely to ensure this kind of recklessness does not happen again because it exposes our people. Definitely, there is a certain level of irresponsibility we have to deal with in this particular case.”

The CS said their extensive tour of Kamiti, including Block A 6 where the trio had been held, did not appear to support the official version of escape given by the prisons’ managers.

“We have gone to the place where the escape allegedly happened, and we have formed certain opinions. We don’t want to discuss that because we don’t want to interfere with the work that the DCI is doing.”

He had said the government will protect whistle-blowers who volunteer information that could lead to the re-arresting of the prisoners who are described as dangerous, with the manhunt teams especially paying attention to the country’s borders and exit points.

"We are all mobilised and have sent messages across the country and all exit and possible movement points out of the country. We are going to conduct a massive manhunt for those three. They are dangerous criminals and we have to get them. And we are going to get them."

The CS had, however, urged Kenyans not to panic over the escape, saying security teams were on high alert and had managed to preempt many of the planned terror attacks.

Abikar was charged and convicted in 2019 over his links to al Shabaab and for abetting the Garissa University attack of April 2015 that left 148 people dead while Odhiambo was arrested in 2019 for trying to join the Somali terror group.

Akhulunga was arrested in 2012 over a foiled attack on Kenya’s Parliament and charged with possessing explosives, ammunition and firearms.