Kenya sent troops to Somalia in 2011 to fight against Al-Shabaab. 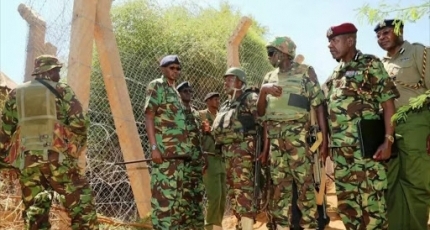 NAIROBI, Kenya - More personnel have been taken to parts of the northeastern region bordering the Kenya-Somalia border following reports that al-Shabaab militants are losing grip in their areas.

This follows a sustained offensive from the Somalia National Army and other local personnel.

Officials said the end of President Mohamed Abdullahi Mohamed popularly known as Farmajo’s reign in Somalia and ascending to the power of Hassan Sheikh Mohamud on May 15 2022 boosted confidence that under the new regime, Somali forces can take the fight to al -Shabab militants’ doorstep.

Kenyan security agents said the Somalia government is making headway in repulsing the militants from the cities they had earlier captured.

For instance, on December 6, 2022, it was widely reported that Ruun – Nirgood which is 77 kilometres East of Adan Yabaal was the only main region remaining in al-Shaabab hands.

“The government troops appear to have seized all districts in the eastern side and now are going for Buq Aqable district to liberate it from the al-Shabaab control. This progress has boosted the morale of Somali forces in their mission to vanquish the al-Shabaab formation and take control of Somalia,” said a senior official aware of the operations.

Reports also indicate that Somali government forces supported by local fighters entered Adan Yabaal, the main town in the middle Shabelle region, which has been under the control of the militant group since 2016.

This is a clear indication that the new Somali government with the support of foreign troops and local fighters has been able to suppress the activities of the militants, especially in rural areas where they usually retreat to after launching an attack.

President Hassan says his administration will invest in the fight against the militants while calling for assistance from neighbouring countries.

The United States pledged to work with mission troops to bring about order in the country.

Barely a year into power, Hassan is walking the talk in a journey to liberate a country which has experienced the worst attacks from the militants since the year 2000.

Kenyan officials said they expect to start experiencing an influx of al-Shaabab militants either escaping from the Somali forces' assault or their own onslaughts.

“The hostile environment in Somalia coupled with the dwindling funding gotten through Zhakat will push the militants towards Kenya through Mandera, Wajir and Garissa borders,” said an official.

Already, local residents have reported they have sighted unfamiliar people in their midst and it is highly suspected they could be al-Shabaab returnees.

According to security agents, residents in neighbouring Somalia’s Jubaland State, say they have been suffering from criminal acts propagated by al-Shabaab.

The residents say the terror group has been forcefully demanding that those in Gedo and Jubaland donate some of their livestock as zakhat to the criminal group.

“This has economically hurt the livelihood of the locals as they are forced to give money to the militants which leaves them with no option to refuse or resist due to fear of repercussions from the group.”

A recently released report by the United Nations monitoring group stated that al-Shabaab for a long time resorted to threats, intimidation and violence to terrify clan elders and locals into payment of illegal taxes.

In other cases, they forcefully rounded up the livestock belonging to the locals and made off with them.

These forceful ways of taking livestock from the locals may be what they did with the camels that they then piously redistributed to hungry and needy families.

A high-ranking al-Shabaab leader who is also the Gedo shadow governor, Sheikh Abdi Rahman recently instructed that 2,000 camels should be distributed to poor families in the Gedo region.

The camels were collected in form of alms from the ‘able families’ for distribution to the hungry and poor families in what can be regarded as a strategy to repress clan uprisings by locals against the militants’ statutes.

Clan elders were then given the responsibility of identifying families that were most deserving of the alms and directed to give them the camels.

Isaq Arabey who is head of the al-Shabaab unit responsible for the collection of alms oversaw the exercise of distributing the camels to the families.

The militant group’s leadership seem to have initiated a few social programs, especially in Galmadug and Hirshabelle aimed at helping these communities but are in reality trying to avert current clan revolts against the militant group’s rule.