UN Secretary-General Antonio Guterres condemned the attack, according to an official statement that said the UN supported the people of Somalia “in their fight against terrorism and their march toward peace.” 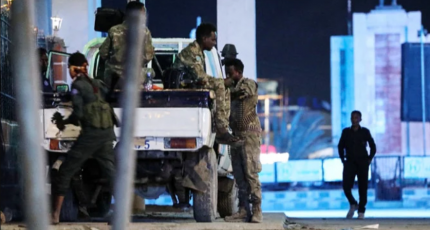 CAIRO: Members of the Jeddah-based Organization of Islamic Cooperation and the UN on Sunday joined Somalia’s allies — including the US, Britain, Egypt, and Turkey — in condemning the terrorist attack in Mogadishu, which killed at least 21 people.

Police and the military in Mogadishu announced on Sunday that Somali forces had concluded a siege at the Hayat and had freed 106 people, including women and children.

Hissein Brahim Taha, OIC secretary-general, expressed his strong condemnation of the heinous act and his solidarity with the victims’ families, the government, and the people of Somalia.

He reiterated the OIC’s principled position against terrorism in all its forms and manifestations.

UN Secretary-General Antonio Guterres condemned the attack, according to an official statement that said the UN supported the people of Somalia “in their fight against terrorism and their march toward peace.”

Saudi Arabia’s Ministry of Foreign Affairs expressed its strong condemnation and denunciation of the terrorist attack.

It affirmed the Kingdom’s position of “rejecting all forms of violence, extremism, and terrorism, expressing condolences and sympathies to the families of the victims, the brotherly Somali government, and people.”

The Egyptian Ministry of Foreign Affairs said Egypt affirmed its “full solidarity with Somalia in this painful affliction, stressing its total rejection of all forms of violence, extremism, and terrorism.”

ATMIS, the African Union force tasked with helping Somali forces take over primary responsibility for security by the end of 2024, also condemned the attack.

Somalia's elite armed forces battled the militants for 30 hours from Friday evening after the attackers blasted and shot their way into the hotel, which is popular with MPs and other government officials.

Three attackers were shot dead during the military operation to end the siege, police said.

Police Commissioner Abdi Hassan Mohamed Hijar said that 106 people, including children and women, were rescued during the siege.

The Al-Shabab extremist group, which has ties with Al-Qaeda, claimed responsibility for the attack, the latest of its frequent attempts to strike places visited by government officials.

Samira Gaid, executive director of the Hiraal Institute, a Mogadishu-based security think tank, said the “audacious attack” was a message to the new government and its foreign allies.

“The complex attack is to show that they are still very much present, very relevant and that they can penetrate government security and conduct such attacks,” she said.

Survivor Aden Ali said he was drinking tea at the hotel when he heard the first blast. He ran toward the compound wall with others as the militants fired at them.

“We were many on the run, over a dozen. When I went out of the hotel, I could see eight of us. Maybe the rest died in the shooting,” Ali said.

Another group of people in the hotel fled to an upper floor, where they were killed by terrorists who first blew up the stairs to prevent escape, he added.

Health Minister Dr. Ali Haji Adam reported 21 deaths and 117 people wounded, with at least 15 in critical condition. He said some victims may not have been taken to the hospital.

In early May, terrorists attacked a military base for African Union peacekeepers outside Mogadishu, killing Burundian troops.

Police are yet to explain how the hotel attack unfolded, and it remains unclear how many gunmen entered the building.