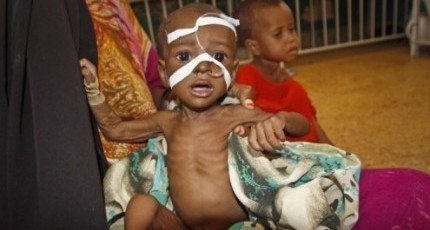 Deaths from malnutrition and hunger have been reported.

“I’m packed up to go,” Maryan Howshow shouted by phone from the town of Bulo Burte. She said her son died of hunger last week, and her voice broke as she whispered his name: Mohamed. “It’s a famine style situation. People are dying.”

African Union forces fighting al-Shabab militants have moved into several towns across southern Somalia, pushing the militants out. But the consequence of that has been that the militants are blocking shipments of food from entering the town, creating a scene of hungry desperation.

The average prices of basic food items has more than doubled in many regions, and more than 70,000 people have been displaced as a result of the fighting, “significantly disrupting the planting season,” she said.

Overnight attacks marked by explosions have become the norm. Tales of starvation are being reported from blockaded towns. Food is being airlifted into some areas but that expensive effort has limited effect. Elders in encircled towns say people are dying, though there is no official overall toll.

“At least five children died of hunger over the past two weeks,” said Mohamed Abdi Tol, the commissioner of Bakool region. He spoke from the town of Hudur, which militants have encircled.

Humanitarian officials have been warning for months that large areas of Somalia risk mass hunger later this year. In 2011, famine hit Somalia, killing an estimated 260,000 people.

Amos told the Security Council that only 19 percent of the $933 million aid leaders are asking for has been funded. Emergency needs in Syria and South Sudan have put a squeeze on aid funds for Somalia.

Earlier this week, the Food and Agriculture Organization warned that a below average harvest is expected in July and August due in part to two weak rainy seasons.

Most of the families fleeing from southern Somalia are arriving in the capital, Mogadishu, and piling into crowded refugee camps. One new arrival is Fatima Isaaq, the matriarch of a cow-herding family that lived for months under a militant blockade.

“We left behind everything to survive,” she said. “There was no food medicine or supplies. We had no choice but to flee.”