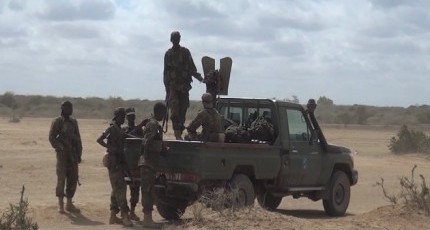 On the same day the terror group also attacked the National Intelligence and Security Agency in the capital Mogadishu.

The town of Kunturwaarey was controlled by Al-Shabaab until Sunday.

They were pushed out by  African Union troops during an offensive which was also backed by government troops.

'There is no way we need to fire; we cannot fight if there is no resistance.

So we entered Kurtunwaarey without a single bullet that has been shot, we do not have to fire if we have not been fired at,' said Brigadier Dick Alum, AMISOM Contingent Commander.

Meanwhile, AMISOM is assuring residents of their safety.

The military campaign against al-Shabaab at the weekend was part of an AMISOM campaign to eliminate the group from Somalia.