MOGADISHU (KON) - A Somali clan leader who fought for years to retake a strategic southern port city he once controlled has laid down arms and joined talks, bolstering government efforts to show it can restore order to a chaotic nation.
Warar Keydmedia Online
1 September 2014 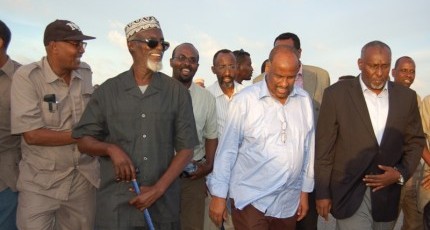 The fate of the city of Kismayu and the surrounding region of Jubbaland is seen as a test of Mogadishu's skill in building a federal system of government and pacifying a nation fought over for more than two decades by warlords and Islamist rebels.

Dozens of people were killed in clashes last year when Barre Hirale's forces battled to regain control of Kismayu from the Ras Kamboni militia loyal to Ahmed Madobe, who had been chosen in May by a regional assembly to preside over Jubbaland.

Hirale and Madobe have for years fought to control the port, which generates valuable revenues from taxes, charcoal exports and levies on arms and other illegal imports.

The African Union force AMISOM, which has been involved in reconciliation efforts, said Hirale and nearly 100 members of his militia gave up their weapons on Saturday after discussions with clan elders and Somali federal government delegations.

The United Nations, the regional African group IGAD and European Union envoys which have supported Mogadishu in brokering a deal welcomed Hirale's agreement to join a reconciliation conference due to take place in coming weeks.

"It is an important step forward in the path towards peace- and state-building for all Somalis," they said in a joint statement on Sunday, when the news about Hirale was announced.

"DEVIL IN THE DETAIL"

Fighting in Kismayu last year raised worries it could re-ignite broader clan warfare across Somalia, where several regions such as Somaliland and Puntland have split away from central government control.

Analysts say breakaway regions may be reassured if the government can show skill in ending the battle for Kismayu and reaching a power-sharing deal to integrate the Jubbaland region into a federal structure.

"While this is significant and important, and certainly a step in the right direction, the devil is in the detail," said Abdi Aynte, director of the Mogadishu-based Heritage Institute for Policy Studies. "There are many potential roadblocks that could eventually see this progress stall."

Some of Kismayu's residents, worn down by years of fighting, were also cautious. Several said many more of Hirale's militia were still hiding in the countryside and could regroup.

"Why did he leave hundreds of his forces and weapons in the forests?" said local elder, Aden Ahmed. "Now it is too early to say if the so-called surrender will improve or worsen the political situation," he told Reuters by telephone from Kismayu.

Hirale ruled Kismayu in the 1990s and into the 2000s until he was unseated by Madobe, who was at the time aligned to the Islamic Courts Union, which ruled Somalia until 2006.

The Islamist militant group al Shabaab then ruled the southern region of Somalia until 2011, when the movement was thrown out of Mogadishu by African troops. It has continued to launch attacks on the capital and elsewhere since then.

Al Shabaab militants attacked a national-intelligence site in Mogadishu on Sunday, an assault that left 12 people dead, including seven of the attackers.