Worse still, needs between now and next June are expected to rise more than threefold, from 214,000 people to 727,000, as drought, violence, and displacement continue to threaten people’s lives and livelihoods. 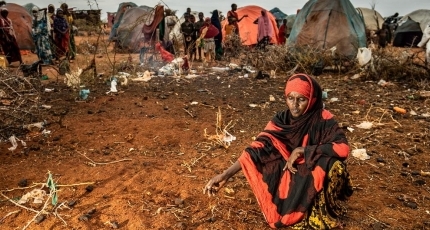 MOGADISHU, Somalia - In Somalia, a full-blown famine has been narrowly averted for now, but the hunger emergency has not gone away, UN humanitarians said on Tuesday.

In an update on food insecurity in Somalia, the UN Office for the Coordination of Humanitarian Affairs (OCHA) said that famine had been avoided because host communities and relief teams had helped those in most need.

Despite their efforts, food insecurity remains “catastrophic”, OCHA said, based on the latest IPC report, which classifies levels of severity from one to five, with five representing a state of “catastrophe/famine”.

Worse still, needs between now and next June are expected to rise more than threefold, from 214,000 people to 727,000, as drought, violence, and displacement continue to threaten people’s lives and livelihoods.

From the UN Children’s Fund, UNICEF, spokesperson James Elder said that youngsters and the most vulnerable were already dying from hunger-related illnesses.

“Fatality numbers are difficult. I have anecdotally, sat with women who have shown me mounds next to their tents in a displacement camp where they have buried their two and three-year-olds”, he said.

“I have sat with women who made a decision who they left behind…There is no doubt that large numbers of children have died.”

The UN system in Somalia highlighted the efforts of national and local authorities, in helping the scale-up of humanitarian assistance to respond to the impact of the longest and most severe drought in Somalia’s recent history.

But aid must be sustained over time and improved, as famine is a strong possibility from April to June next year, and beyond, if assistance is not sustained and if the April to June rains fail again, as current forecasts indicate.

“The collective scale-up of humanitarian assistance, including Somali capacities, has prevented food insecurity and acute malnutrition from reaching Famine (IPC Phase 5). As of October, humanitarian partners have reached about 6.8 million people with life-saving assistance,” said Adam Abdelmoula, Resident and Humanitarian Coordinator for Somalia.

“Even without a famine declaration, the situation is extremely alarming,” he added.

“The scale and severity of the emergency are expanding as displacement continues unabated, food and water prices remain high, critical gaps in the response persist, and as the current rains have been poor and insufficient for replenishing water sources and sustaining grazing fields for livestock.”

The number of people affected by the drought in Somalia has more than doubled this year, from 3.2 million in January to 7.8 million in October, with the severity of needs increasing in proportion.

Displacement caused by drought increased more than fivefold to almost 1.3 million people in the same period, the UN in Somalia said.

The 2022 Somalia Humanitarian Response Plan (HRP), which seeks $2.27 billion to meet the needs of 7.6 million people has a shortfall of over $1 billion as of 13 December.

“We thank donors for their generosity to date and appeal for immediate additional and flexible funding to enable a further scale-up and improvement of humanitarian operations,” said Mr. Abdelmoula. “Together we have averted famine, albeit temporarily. We can and must make sure that this becomes a sustained reality for the people of Somalia.”